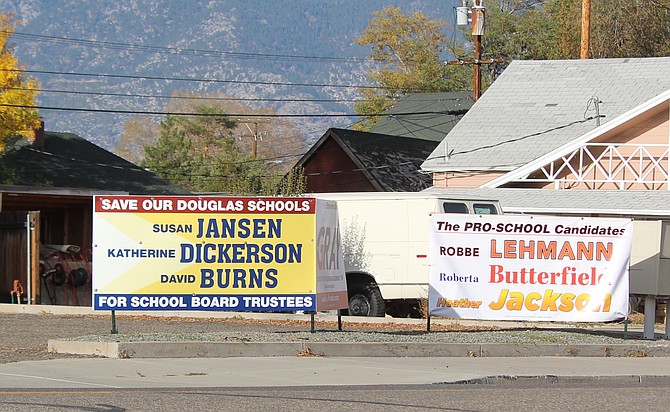 Campaign signs for both slates seeking Douglas County School Board are prominently displayed in downtown Gardnerville.
Photo by Kurt Hildebrand.

The more than $70,000 raised by the two factions in the contentious races for Douglas County school board of trustee makes it the most expensive since the board was created 70 years ago.

Challengers David Burns, Susan Jansen and Katherine Dickerson raised just over $37,000 in their campaign, according to documents filed with the Nevada Secretary of State’s Office.

The deadline for the final campaign finance reports before Election Day was Saturday. Reports are posted at www.nvsos.gov/soscandidateservices

Meanwhile school board trustees Robbe Lehmann and Heather Jackson, along with Roberta Butterfield raised around $33,000.

One of the major contributors to the challengers’ campaign is a political action committee registered to former Douglas County Commissioner Dave Nelson.

The Nevada 1st committee was seeded by a $50,000 loan from Simon for Governor Campaign Manager Nicholas Maier.

The committee directly donated $9,000 to the three candidates. Nelson said he recruited Burns to run, and wife Jeanne Shizuru accounted for $5,000 of the $14,706 Burns has raised so far in the campaign. Burns’ campaign has raised another $6,066.66 since July 15.

Sunridge resident Edward Hayes and Nelson each donated $1,000 before the June primary that Burns lost to opponent Roberta Butterfield.

Butterfield’s total expenses were $8,135.42 as of Saturday’s reporting deadline.

The Retail Association of Nevada provided $4,997.32 for text advertising to Butterfield’s campaign accounting for all but $1,000 of those in-kind contributions.

He reported $1,628.60 for text messages and mailers from the Committee to Improve Nevada Economy and Education System.

Challenger Jansen reported total donations of $10,054 to the Nevada Secretary of State’s Office, with $6,550 since July 15.

According to the report, $3,500 came from the Nevada 1st political action committee operated by Nelson. Gardnerville resident William Long donated $1,000.

Appointed school board trustee Jackson raised a total of $7,904 in her first foray into politics, with $5,192.65 since July.

Like Lehmann, she benefitted from $1,628.60 from the Committee to Improve Nevada Economy and Education System for a mailer and text messaging.

Of that the Nevada First Pac donated $3,500, while Gardnerville resident Dallas Debatin donated $1,166.66.