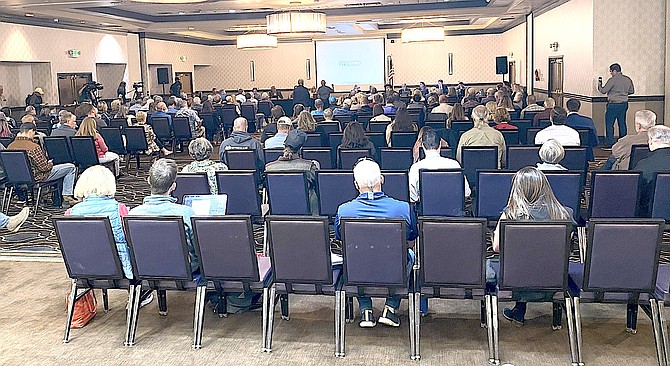 Douglas County commissioners and members of the Vacation Home Rental Advisory Board discussed the future of the rentals in the Revolution Room at the Hard Rock in Stateline on Thursday. Tahoe Douglas Fire Protection District Photo

After nearly six hours of meeting, Douglas County commissioners declined on Thursday to take action to repeal the vacation home rental ordinance that has been in place since July 2021.

Commissioner Walt Nowosad, who has been critical of the program since its formation, sought to have it repealed back in July. Instead, commissioners moved the meeting to Lake Tahoe, which is the only place in the county the rentals are legal.

On Thursday he moved to repeal the ordinance, but that action died for lack of a second.

Members of the vacation home rental advisory committee asked commissioners to give them more time to finish their task rewriting the ordinance.

Committee member Michael Sloan said the board has met 10 times so far and has had 20-25 people at every meeting. They’ve started meeting twice a month in an effort to make faster progress.

“We are a good board,” he said. “Give us the chance to proceed with our ideas. Then we can proceed with this program.”

Commissioner Danny Tarkanian pointed out that the board has been working for a year.

In addition to rewriting the code, the advisory board has also had long meetings on requests for Tier 3 rentals, which have the largest occupancy.

Just three or four of those discussions consume hours of committee time. Sloan said only about half of those have been approved and about half conditionally approved.

“Give us a chance to make this a balanced program,” he said. “You’ll be blown away by all the great ideas we have.”

“There needs to be people with a local broker, not someone who has a secretary at Lake Tahoe,” he said. “The density of one poorly managed VHR is too many for the neighbor who is 30 feet away. This is a complex issue balancing property rights against the peaceful enjoyment of the property. There is no simple solution.”

Deputies at the Lake do respond to parking and noise complaints, but they also have to respond to calls in the casino corridor that might be a bigger priority.

“If you place your faith in enforcement, when calls are prioritized there are some natural limitations,” Byers said.

Tarkanian argued for his idea to determine density of VHRs by how close they are to actual tourist destinations.

He said he has been trying to get that on the agenda for discussion.

He said his proposal would eliminate 41 VHRs in neighborhoods away from the casino core, but add 50 in Tahoe Village, which Byers said was about 80 percent timeshare and VHRs now.

The joint meeting took hours of public comment about the program on Thursday, including the presentation of a change.org petition by Tahoe Douglas Neighborhoods Group organizer Linda Dengler.

“On behalf of the Board of County Commissioners, the Vacation Home Rental Advisory Board, and County Staff, I want to thank the members of the public who participated in this joint meeting today by providing public comment regarding this important matter,” said Commission Chairman Mark Gardner. “It is our objective to make this program work to benefit all residents of Douglas County.”

The Vacation Home Rental Advisory Committee is scheduled to next meet 1 p.m. Oct. 26.