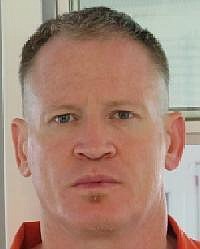 A drunken safecracker who made off with The Record-Courier’s safe was sentenced Tuesday to an additional 18-60 months in prison for burglary of a business.

Dylan Matthew Pettigrew, 46, is currently serving a prison sentence for a string of burglaries from 2017, including one in which he was caught trying to drill into a Valley home’s safe. That incident led to a manhunt in below-freezing weather in December in which he managed to evade capture.

“In late 2017., Mr. Pettigrew went on quite a tear,” attorney Brian Filter said. “He was binging on drugs and alcohol. He doesn’t remember the details of it.”

Pettigrew was first captured after investigators found a laptop at the scene of the burglary that had his email address. He was arrested in Carson City in February 2018.

But it was Pettigrew’s penchant for cheap whisky that revealed his involvement in the Sept. 17, 2017, R-C caper. DNA recovered from a bottle left in the newspaper offices led investigators to him.

“I’ve made some terrible choices in my life,” Pettigrew said. “I’m ashamed of what I’ve done. I’ll do everything I can do to remain sober.”

Four of his five prior felonies are for burglary, prosecutor Erik Levin said.

“He took the safe out of The R-C that had been in the office predating any of the employees at the time,” Levin said. “Now it’s gone. What he took had more than the dollar value, and it had no value to the defendant.”

The safe was already a fixture in the Eddy Street address before The R-C moved in 1996.

Pettigrew also took laptops and other personal items in the burglary.

District Judge Tod Young made the sentence consecutive to his current term, which means he won’t be getting out before 2026 at the earliest.

Pettigrew was ordered to pay $3,450 to the newspaper for the safe and its contents plus $275 to an employee for the personal items.