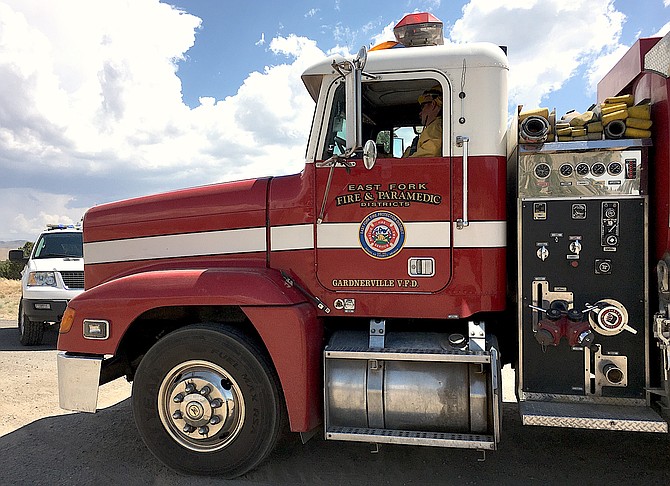 “Over the years, Douglas County has done well partnering with (East Fork) to plan prepare and respond to disasters in the community,” County Manager Patrick Cates said. “However, the evolving nature of emergency management points to a need to reassess the adequacy of the county’s current emergency management program and identify critical gaps and opportunities for improvement in emergency planning, preparedness and mitigation."

The county commission voted on Thursday to have county staff explore altering or terminating the contract. Commissioner Wes Rice said he had people call him to find out if this was a power grab on the part of the county manager. "It's not a power grab," he said. "East Fork is not going to suffer from the loss of this contract. I hope the spirit stays as pure in its intent as it is meant to be."

East Fork Chief Tod Carlini has served as the county’s emergency manager since 2007.

Carlini said the district was blindsided by the discussion of canceling the contract with Douglas County to provide emergency management.

“The news of this potential was only received by the District (Sept. 29), right prior to the posting of the county agenda,” he said on Thursday morning. “We knew nothing of this prior. We were not included in any of the discussions or what the plan would be going forward, which obviously had been occurring for some time.”

Carlini said that not only has the East Fork district has provided emergency management services to Douglas County for the past 16 years, the first seven years were without a fee in consideration of the national recession and impact on county revenues.

He said it has been four years since the district has increased the costs of emergency management services.

“We have provided services for every single major event since the 1997 Flood, have been in compliance 100 percent of the time with all state requirements, have received clean audits from the state for our management of millions of dollars in federal grants, have written two five year hazard mitigation, FEMA approved plans, managed the COVID-19 Pandemic, received our annual approval from the State for the County’s Emergency Operations Plan, implemented and maintain one of four CERT Teams in the State, and managed one of the most active LEPC’s in the state,” he said.

The district provides infrastructure for emergency management, including a command post within its offices where county commissioners have met multiple times to declare emergencies for floods and fires over the past seven years.

“The value vested in institutional knowledge can’t be calculated and appears to be of no value to the Douglas County,” Carlini said.

In order to fulfill the county’s emergency management functions, it would require the hiring of an emergency manager, coordinator and a communications manager, in addition to a half-time accounting specialist.

Cates said the current agreement with East Fork costs the county $255,000 a year.

That’s the amount Cates said it would cost to establish a department.

East Fork’s contract will run through the end of the fiscal year in June 2023.

Emergency Communications Director Ron Sagen has indicated he plans to retire in February 2023, according to the county.

“His departure presents an opportunity for the county to evaluate for the first time, creating a full-time emergency management director and one full-time support position within the direct command structure of the organization,” Cates said.

“With this structure in place, the emergency management with (East Fork) could be eliminated over time or significantly reduced depending on the needs of the county,” Cates said. “It will be important for the county’s new emergency management director to continue to coordinate with (East Fork) and other relevant outside agencies to ensure the effectiveness of the program moving forward.”

County commissioners recently repealed a requirement for sprinkler systems in new homes more than 1,000 feet from a fire hydrant over the fire district’s objections.

The district is currently working on regulations that would replace the requirement.

Until 2016, county commissioners served as the board of trustees for the fire district. That was when commissioners approved establishing a separate elected board to govern East Fork, similar to the Tahoe Douglas Fire Protection District.