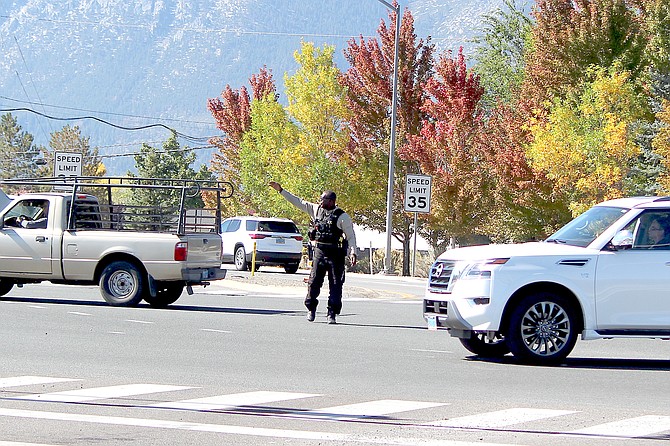 A Douglas County Sheriff's deputy directs traffic at highways 395 and 88 after a power outage affected a large swath of the western portion of the county.
Photo by Kurt Hildebrand.

A power outage that affected most of the western half of Douglas County from Minden to Lake Tahoe was caused when someone made contact with power lines, according to NV Energy.

NV Energy spokeswoman Jennifer Schuricht said the incident occurred around 9:30 a.m. and power was back on by lunchtime.

More than 9,100 Douglas County homes and businesses were affected by the outage, which knocked out the traffic signals along Highway 88 including the one at Highway 395 and the one at Mottsville Lane.

Deputies and Nevada State Police troopers directed traffic at the intersections until the power came back on.

Douglas County dispatch reported power was out to its internet services, as well.

The affect to Spectrum customers lingered until well after power was restored, with some Minden residents reporting their internet was down well past midnight.

Not affected in the outage were most places east of Highway 395 including Gardnerville, where residents noticed a blink, but never lost power.

More than 9,100 Douglas County homes and businesses are without power this morning after an outage occurred at around 10:20 a.m.

The outage also affected traffic lights along Highway 88 at 395 and Mottsville.

Minden, Genoa and Lake Tahoe are reporting outages.
As of 10:50 a.m. Gardnerville is mostly unaffected.