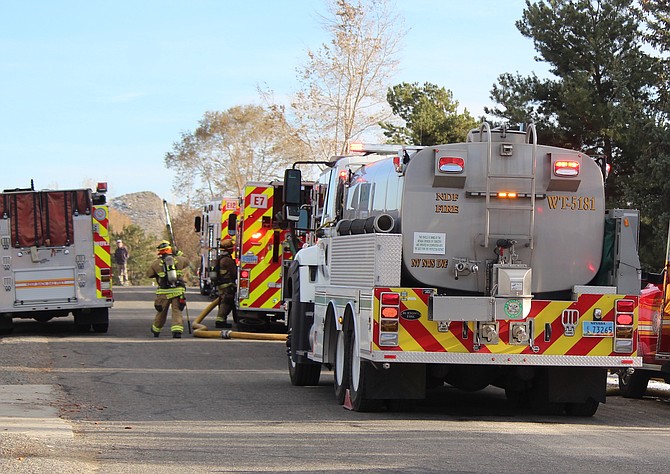 No fewer than three water tenders were required to extinguish to a chimney fire on Meadowlark Circle in the Gardnerville Ranchos on Thursday.

With no hydrants, East Fork firefighters had to bring their own water, which ran dry at one point. The fire’s forward progress was stopped at 3:10 p.m.

“This is why we need a regulation,” East Fork Chief Tod Carlini said pointing to the flat firehouse coming from a tender.

On Tuesday East Fork Fire Protection District trustees read new regulations into the record for the first time. Before the new regulations are approved they will have to be read at least one more time in December.

East Fork Fire Marshal Amy Ray said the regulations include requirements from the State Fire Marshal’s Office, the International Fire Code and the elements of the Douglas County Code that commissioners repealed in August.

It was also the first time builders opposed approval of the regulations.

Carter Hill Homes President Brandon Hill said similar regulations aren’t being enforced in any of the other rural counties in the state.

Key to the motivation to implement the regulations is ensuring there is sufficient firefighting water to extinguish a house fire.

“There are countless projects that won’t come forward because of the cost,” Hill, who also serves on the board of the Nevada Builders Alliance. “Those costs at such a level that will be untenable.”

Liberty Homes’ Christian Funk said the regulations discriminate against those who build in rural areas.

A large portion of the regulation requires those building a new home or remodeling an existing home more than 1,000 feet away from a fire hydrant to install a sprinkler system, a fire flow tank or contribute to the purchase of a fire tender.

Carlini said that when the ordinance was in effect it only dealt with about 10 percent of the homes that were reviewed.

Large projects, such as Clear Creek, require sprinklers in the homes.

Sprinklers won’t protect a home in a wildfire, but will slow down an interior fire long enough for a family to escape.