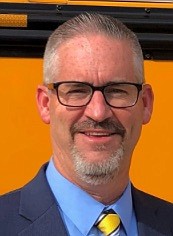 A revised contract will give Superintendent Keith Lewis a $15,000 raise to a base salary of $175,000 after Douglas County School Board trustees approved the contract on Wednesday night.

A pay comparison showed that Lewis was making $160,043 before, which put him ninth on the list of rural districts in the state.

Top of the list, Lyon County’s superintendent makes a base salary of $230,000.

At least one clause in the contract serves as a firewall against the transition on the school board of trustees.

“The failure by Lewis to comply with a board directive which violates a legal mandate imposed by the United States or the State of Nevada shall not constitute ‘cause’ for termination,” according to the contract.

Lewis congratulated new trustees David Burns, Katherine Dickerson and Susan Jansen, who were at the meeting on Tuesday.

Trustees rated Lewis highly effective in a performance evaluation before taking up discussion on the contract.

“Keith Lewis is one of the best superintendents I’ve worked with,” 12-year trustee Ross Chichester said. “I know he works hard. I see his car at the district office all hours of the day and night. He puts in the time it takes to be superintendent.”

Trustee Doug Englekirk said he rated Lewis highly effective but didn’t give him the highest rank across the board.

“I think you’re doing yeoman’s work here,” he said. “It’s amazing to me the amount of stuff you bring to our attention.”

Former school board trustee Tom Moore said it was an honor to work with Lewis over the years.

“I don’t think the board can do any better,” he said, calling Lewis the best asset in the district.”

Under the revised four-year contract, Lewis won’t get a raise before Nov. 16, 2023, and will be eligible for the same benefits as all regular 12-month administrators.

Under the contract, school board trustees can terminate Lewis at any time with or without cause after giving him a 90-day notice.

Unlike other employees, the superintendent doesn’t have a right to a hearing prior to involuntary termination. However, he can challenge termination for cause under binding arbitration.

If Lewis is fired without cause, the district must pay a year’s salary retirement and COBRA for a year.

Unlike most district employees, Lewis is not represented by an association which negotiates for pay increases.