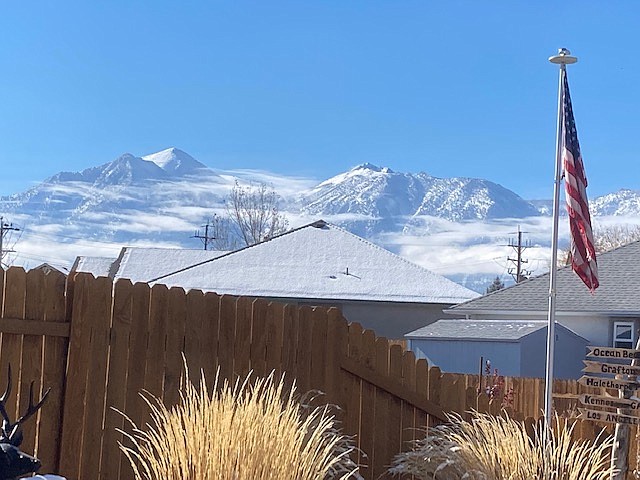 Clouds hang near Jobs Peak. Photo special to The R-C by Reggie Mueller

In fact, the county hired an outside law firm to fight the association and bargaining unit, costing tens of thousands of taxpayers’ dollars. It seems the county would rather pay for outside attorneys rather than pay their law enforcement officers industry standard wages. For example, a new Douglas County Deputy will start their career making 20 percent less than a new Carson City deputy, 35 percent less than a Sparks Police officer and 47 percent less than a Reno Police officer or Washoe County deputy. Douglas has the lowest starting wage of the group, making it very difficult to attract and retain qualified officers.

A second reason Douglas law enforcement officers feel like county management is against us is because we did not receive the 9 percent raise promised to all county employees by the county manager in July 2022. We were the only group of public employees to not receive the 9 percent raise. A third reason is that the county, as of July 2022, suspended annual merit and performance raises for deputies, investigators and sergeants. Raises are suspended indefinitely with no guarantee of retroactive pay once restored. The county’s decision to withhold annual merit-based raises is a slap in the face, causing financial hardship for DCSO personnel and their families.

I personally believe the DCSO is the best law enforcement agency in Nevada. To remain the best and to continue to earn our beloved community support, we must be able to attract, hire and retain uniquely qualified and highly trained candidates. It’s difficult to do that without paying industry standard wages, at a minimum. I wish county ,management’s actions showed us they were willing to work with us. But for now, their decisions and actions suggest the opposite.

Therefore, I encourage you to ask a DCSO officer how they feel about working without a contract, the county fighting against us earning industry standard wages and benefits, hiring outside attorneys for mediation/arbitration costing taxpayers thousands of dollars, not giving us the 9 percent salary increase every other County employee received as promised and suspending our annual merit/performance evaluations. Despite these things, I sincerely hope for a mutually beneficial resolution to the ongoing labor/contract negotiations. The safety and wellbeing of our community and our officers depends on it.

Endorsed by the Sergeants Bargaining Unit

Our airport governance is broken again. Despite the efforts of some of its volunteer members, the Airport Advisory Committee has been entirely ineffective at its duties of oversight, representing concerns of all stakeholders, and advising the county commissioners on airport policy. Thirty concerned airport users attended the recent AAC meeting to communicate their issues, only to find the meeting cancelled after 10 minutes due to the lack of a quorum of the seven members. The next AAC meeting is not scheduled until January. And they only meet six times a year.

Attendees were there due to a long list of grievances (unaddressed for months and even years) that are mostly hurting local small plane aviators who are the heart of our airport. For example, 77 local aviators are waiting to get a rental hangar - roughly a 20 year wait — while 87 acres on the west side have been held vacant for more than 20 years due to a leasehold with plans to develop large jet hangars.

Did you know that the current controlling document for the future of our airport is the Airport Master Plan? It is over 200 pages long and dated 2016. It includes extending the runway to almost 2 miles long for big jets, includes a control tower and capital spending of $100 million over 20 years. This focus on commercial growth would be a huge change in the character and the role of our small-plane friendly airport. How did this get approved? Simple answer — too many of us stood down, largely in ignorance of what was getting approved under our noses.

But I think we have a brighter future. The Master Plan will soon be due for updating, so we all have the chance to get our voices heard. Several seats are opening up on the AAC, so I urge concerned citizens to throw their name in the hat so it can again be a major part of good governance. The next Board of County Commissioners will be seated very soon, and I am hopeful for a renewed interest in getting our airport back on track. A lot of airport users are activated to get things fixed. Members of the community and all stakeholders should also engage.

As usual, a lack of communication is at the root of all this. And some attitudes and expectations will need adjusting. But this should not be difficult. So, I urge all parties to renew their vigor to redirect our airport, which is a critical county asset, and no less so than our roads and schools. You can write to the AAC and airport management at this address: aac@mindentahoeairport.com And as always, The Record-Courier is a wonderful method of making your voice heard.

Plan would turn 50 into death trap

Just like the town of Paradise in 2016, our Board of Commissioners ignores the fire danger due to reducing the only evacuation road for 30,000 residents of the Tahoe Basin. They silently approve of the “Road Diet” in NDOT’s woke jargon, which means a lane reduction from four to two lanes. Where is the assessment from the fire department on how this changes the evacuation plans? We all lived through last years Caldor Fire. We experienced the congestion during the 10-hour long evacuation with four lanes. How can this be safe?

The public input events by NDOT were simply venting sessions planned to be ignored. The residents and businesses along I50 were not asked for their concerns. How else could it happen, that Skyland GID was approved by NDOT and the county for a new fence costing $800 000? And now their plans may threaten a removal of the fence. And what will happen to the sewer line running under I50? They didn’t other to ask the Tahoe Douglas Sewer District about their needs to service it either.

How come there are at least wo roundabouts planned on Spooner Summit and at Stateline’s 207 intersection. We all know what that does to traffic in Kings Beach. Why not simply putting traffic lights at Spooner? And what is wrong with the lights at Stateline?

The Commissioners claim they have no veto power stopping this project. But when NDOT first proposed this in 2017 two commissioners objected, and it was stopped.

Does our current Board of Commissioners really want to be remembered as the Board that set the trap to kill us?