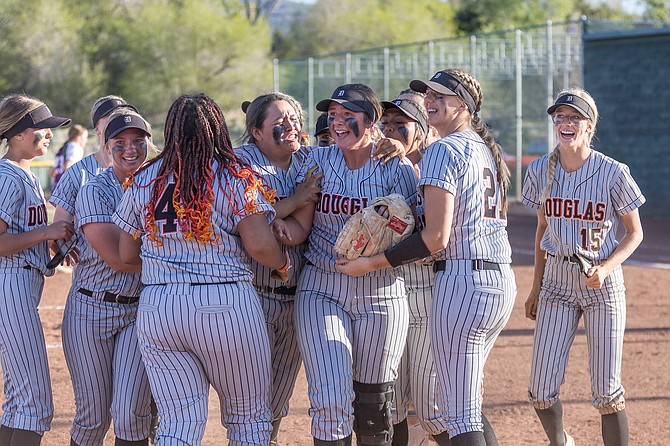 Talia Tretton (19) is mobbed by her teammates after Douglas High softball clinched a spot in the Class 5A state tournament Friday evening. Douglas will need to win one game Saturday to secure a Northern 5A regional crown.
Photo by Ron Harpin.

‘Take the bus to Vegas.’
It was always the goal for the 2022 Douglas High softball team to make the state tournament.
Friday evening, the Tigers punched their ticket with a 2-1 win over the top seed in the Class 5A North, Spanish Springs.
It was an emphatic win, highlighted by the performance of sophomore pitcher Talia Tretton, who continued to show why she is one of the most dominant players in Northern Nevada.
“It’s really exciting because we get to go to state next week,” started Tretton postgame. “But we have a job to do first tomorrow (Saturday), which is to win the regional championship.”
After being mobbed by her teammates outside of the dugout, Tretton and the rest of the Tigers were able to celebrate for a few moments.
However, Douglas was fully aware of what was next.
Spanish Springs and Reed will lead off tomorrow’s docket with the consolation final at 10 a.m.
At noon, the winner of the consolation game will meet Douglas in the regional championship.
Since the Tigers are the only team remaining without a loss, Douglas only needs to win one game Saturday.
Should the Tigers lose the first game of the regional final, a winner-take-all game will be played following that contest at noon.
Tretton, the sophomore hurler, never hesitates when it comes to crediting the team around her.
“I felt confident going into this game and I have such a hardworking catcher. She frames so well for me. Without her, I probably wouldn’t get a lot of the strikes I get,” said Tretton. “I wouldn’t be able to do what I do without my defense and my teammates.”
“She’s just phenomenal,” said Douglas head coach John Glover of Tretton. “She does it in the circle. She does it at the plate. She’s a special player and we are lucky to have her.”

With her 13th strikeout of the contest Talia Tretton and the Tigers punch their ticket to the Class 5A state tournament.

Douglas will be back in action tomorrow at noon in the regional final. pic.twitter.com/AMRHodzqTu

Starting off the right way
Douglas had its leadoff hitter on base in six of the seven innings played Friday.
Though the Tigers managed just two runs, Spanish Springs’ pitcher Hailey McLean was under at least some stress in nearly every inning.
Douglas put together nine base runners over the course of the game and jumped on the board in the top of the first.
Haley Wilkinson singled to leadoff the contest and was moved over by a sacrifice bunt from Eva McNinch.
Tretton took a 2-2 pitch in her first at-bat and doubled it out to center field, scoring Wilkinson.
The sophomore second baseman went 2-for-3 against the Cougars and reached base on a walk in the seventh.
“She’s excelled so much as a player,” said Tretton of Wilkinson. “I’m so proud of all that she has done for us.”
Wilkinson is 5-for-11 in the regional tournament with three RBIs and three runs scored.
The third inning was almost an identical scenario after senior centerfielder Emma Stagliano led off the frame with a single.
With one out, McNinch sacrificed her over to second and Tretton smashed a line drive past the Cougars’ third baseman, which brought Stagliano in to score.
The only inning in which Douglas’ 2-0 lead was threatened was the seventh.
Cougar catcher Sharlee Jackson made it to third off a hit that landed in the right field corner.
Glover took a moment to talk to Tretton and the rest of the infield after the triple.
“I let them know that the runner at third wasn’t important,” said Glover. “They’ve been in these pressure situations.”

The run scored on an RBI groundout to McNinch at shortstop, but Tretton fanned two of the next three batters to close out the game.

Tretton ended her day in the circle with 13 strikeouts to go alongside zero walks. 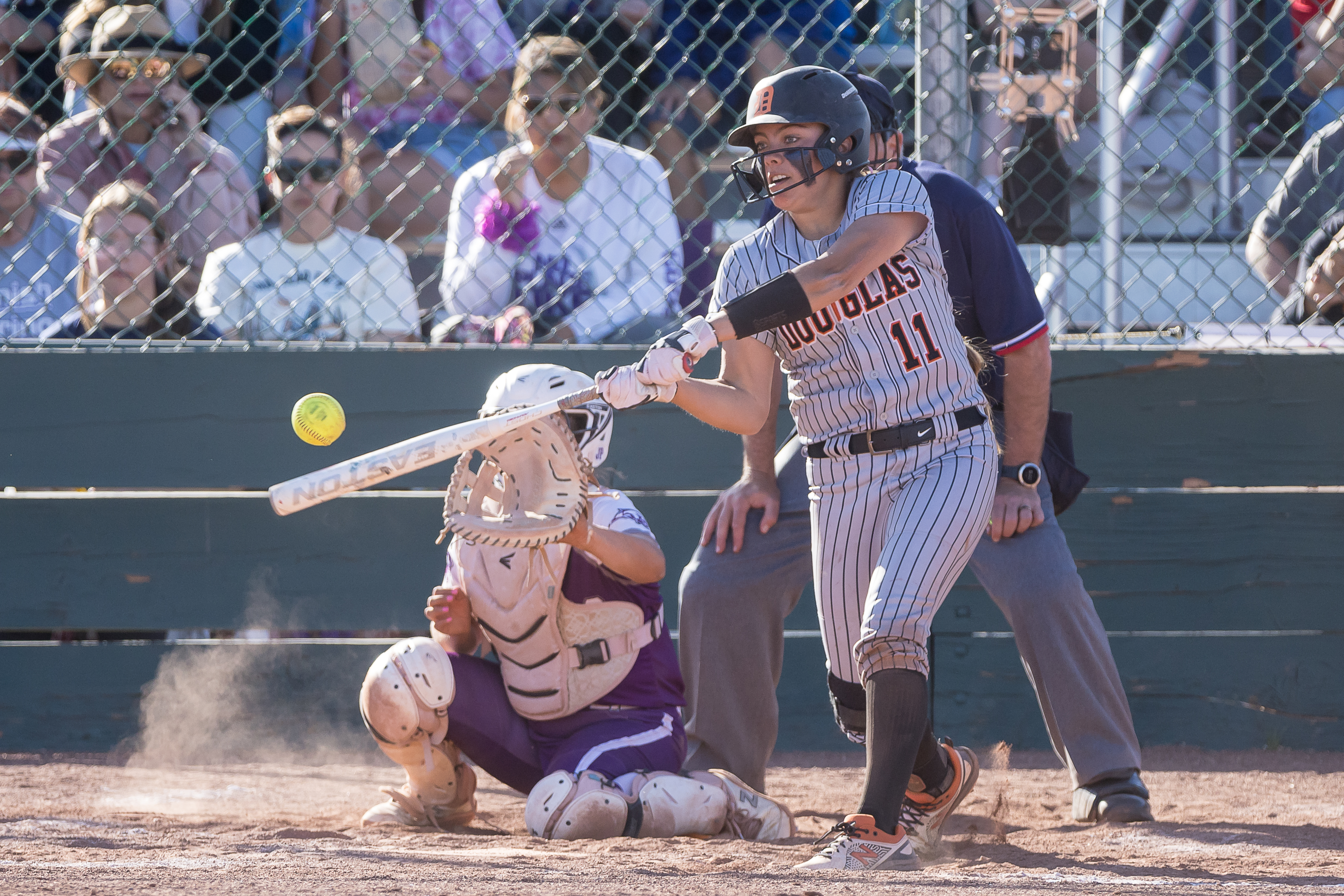 (Zora Simpson lines a hit in the fourth inning against Spanish Springs in the regional semifinal Friday. Simpson was 1-for-3 in the Tigers win as Douglas punched its ticket to the state tournament. / Ron Harpin)

Douglas began the day with a win over No. 3 McQueen in order to make the regional semifinals.
After a 1-0 win over No. 7 Reno the day prior, the Tigers didn’t have much trouble letting the bats wake up Friday afternoon.
Douglas scored runs in six of the seven innings, including a four-spot in the second, which gave the Tigers a 5-0 lead.
Tretton was 4-for-4 with four RBIs, including a no-doubt two-run homer over the center field fence.
In the circle for Douglas was Mackenzie Willis, who cruised to an 11-strikeout performance.
With only one walk allowed, Willis held McQueen without a run until the fifth inning.
Bri Williams, Ava Delaney, Wilkinson and Stagliano all record two hits apiece in the win.