Douglas baseball heads into regionals as No. 2 seed 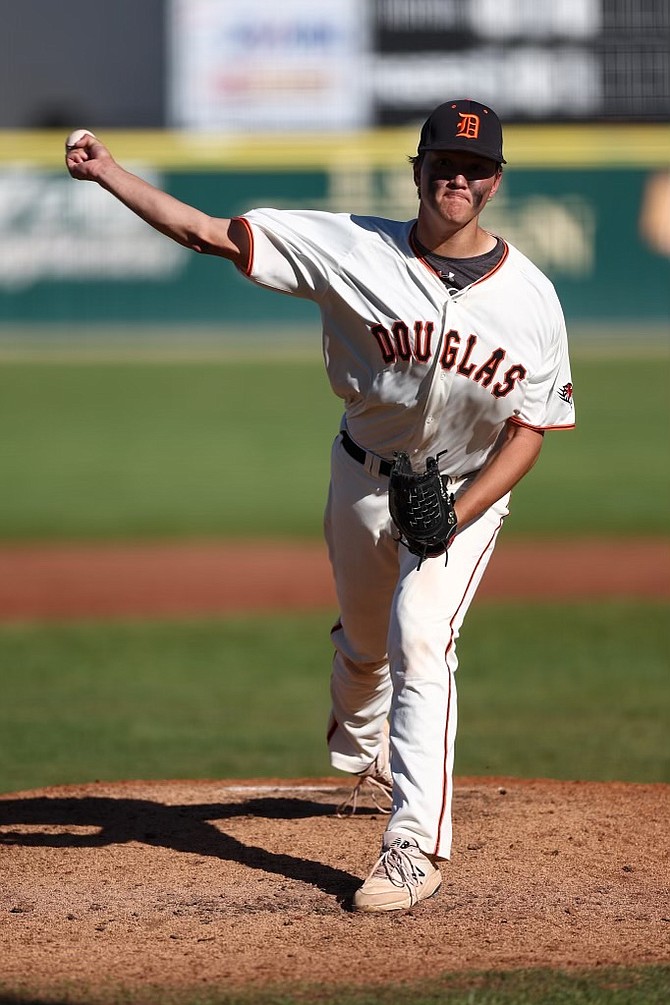 Douglas High's Noah Kohbarger delivers a pitch during his four-inning start against Carson Wednesday. Kohbarger didn't allow a hit and struck out four in the Tigers' 10-0 win.
Photo by Ron Harpin.

Douglas High School baseball capped its best season since 2008, which is as far back as MaxPreps regular season tracking goes for the Tigers.
A few teams crossed the 20-win threshold, but no team in the last 14 seasons has posted a winning percentage as high as the 2022 Douglas team, which ends the season with a 23-6 record.
With a 13-3 clip in Class 5A North league play, Douglas has secured the No. 2 seed as the regional tournament rolls around next week.
“It means everything. The boys stepped up. They had an assignment from the very beginning of the year and they completed that,” said Douglas head coach Ryan Gonzalez. “Our coaching staff has been excellent and we owe it to them too.”
The Tigers will open the regional tournament on their home field against Damonte Ranch (12-16, 6-10) Tuesday at 4 p.m.
The regional tournament is double elimination so Douglas will be able to afford a loss before being faced with elimination.
With a win, the Tigers will be back on their home field Wednesday for a 4 p.m. start against the winner of No. 3 Bishop Manogue and No. 6 Galena.
The higher seed will host every game in the regional tournament until the finals.
Three wins in a row would put the Tigers in the regional finals Saturday at 10 a.m. at Peccole Park on the campus of the University of Nevada.
“It’s crazy. In the beginning of the season we set goals and achieved them, but we’ve got more work to do to prove ourselves,” said senior Gabe Natividad.

Douglas no-hits Carson to finish season
Wednesday afternoon, the Tigers finished the season on an emphatic note with a five-inning combined no-hitter between pitchers Noah Kohbarger and Kaden McIver.
Kohbarger went four innings and struck out four while allowing three base runners on walks.
McIver took over in the fifth and put together all three outs on strikeouts with one walk.
“Noah got his start and pounded the zone,’’ said Natividad. “McIver came on in relief like he has all year. It was awesome.”
Douglas jumped on the Senators in the first frame with five runs behind two-run doubles from Gabe Foster and Carson Hill.
Carter Bleeker drove in his second RBI of the game in the third inning with a single to left field. Jason Hernandez tacked on a two-run double of his own to give Douglas an 8-0 lead to end the third inning.
With two more runs in the fifth, the Tigers closed out the contest via run rule after a pair of Senator errors.
From a 3-16 turnaround from a season ago, Gonzalez thought it was the belief and work ethic of his squad.
“They’re a different team,” said Gonzalez. “Not to discount the past, but it’s our year. I believe in a lot of superstition. Us playing great defense, command on the mound and putting up good swings just makes a huge difference.”
With at least the next two regional contests at home, the Tigers’ are confident they can find postseason success.
“Pitching, hitting, fielding. We’ve been a family,” said Natividad. “It’s hard to beat us here. We love playing here.”
This season, Douglas went 11-1 on its home field with its only loss coming in 11 innings against McQueen earlier in the week.