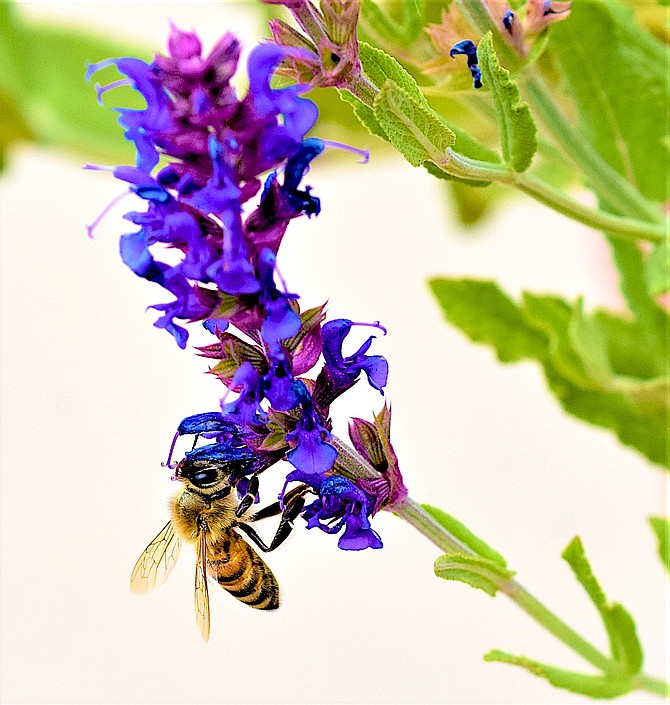 In honor of the final week of Pollinator Month, we're publishing Tim Berube's photo of a bee hard at work in his garden. "My Garden of a Thousand Bees” will be shown 7 p.m. Friday at Carson Valley United Methodist Church.

Genoa, Nev. — New Douglas County VHR Program Manager Ernie Strehlow attended what I believe to be his first meeting on Wednesday. Sort of following its record, so far, one Tier 3 vacation home rental was conditionally approved for Tahoe Village and one was pulled from the agenda.

The real takeaway from Wednesday’s VHR Advisory board meeting is that process is still very much a work in progress. At least two board members referred to proposed changes in the ordinance governing VHRs in discussion of the one approval.

I’m hoping to see final results from last week’s election today so I have an update for Saturday. Commissioners are scheduled to canvass the vote 4 p.m. Friday, but by that time The R-C will be rolling off a press somewhere.

Firefighters are training all over the Sierra Front in these first days of summer. East Fork Fire District tenders gathered at the Fairgrounds on Tuesday evening to allow crews to practice their craft. Those tenders are a critical source of water on the front end of any wildfire.

Veterans and their families who’d like a free try at the climbing wall at the Douglas County Community & Senior Center 11 a.m. to 1:30 p.m. Sunday should RSVP by calling Community Services at 775-782-5500.

We received a little bit of rain for the second night in a row in Genoa. It was barely enough to soften the detritus at the bottom of the gauge, but even a little is a help. That said, it’s possible we could see some flooding in spots today depending on where the thunderstorms pop up.

The forecast calls for scattered showers and thunderstorms today with a high of 84 degrees, and the wind out of the southeast 5-15 mph shifting northwest in the afternoon. It sounds like they might clear out by 8 p.m. tonight, but the weather does not wear a watch.