Genoa Cemetery Fire a hint of things to come 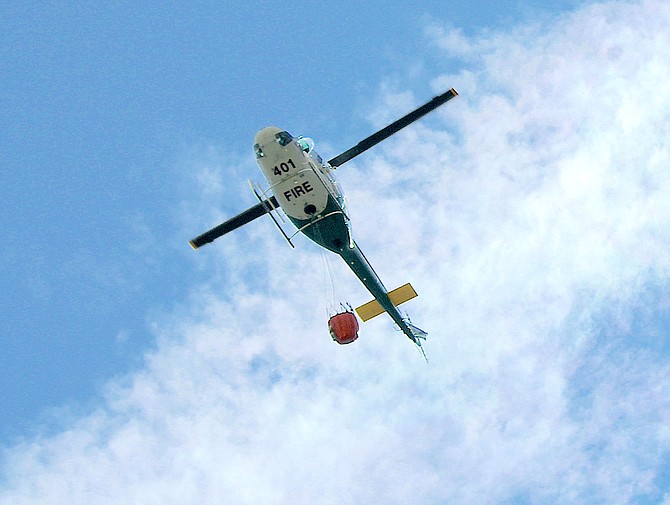 A firefighting helicopter flies over Genoa on Friday evening.

For the second time in just over a month, construction work sparked a wildfire in Carson Valley that threatened structures.

Friday’s 3.5-acre Genoa Cemetery Fire was the first fire of the season to prompt a call for evacuations, but it’s unlikely to be the last.

Residents living on Trail and Holton courts, along with those in the southern Genoa Lakes were notified in-person and by Reverse 911 of the danger as flames devoured chest-high buckbrush just north of the Genoa Cemetery.

One home was scorched as East Fork firefighters turned out to stop the flames from crossing either Jacks Valley Road or Centennial Drive.

Helicopters made at least a half-dozen drops on the fire as residents eyed the flames warily.

Flames shot up above the tall buckbrush not long after the fire was first reported at 2:40 p.m.

Jacks Valley Road was closed for around three hours.

East Fork Chief Tod Carlini said it was fortunate that the fire was held between Centennial and Jacks Valley.

Had it crossed Centennial heading up the mountain it would have entered the heavy timber. Had it jumped Jacks Valley Road it could have affected homes in the Genoa Lakes Resort Course. Hand crews from both East Fork and Tahoe Douglas helped fight the fire.

There was no report of injuries or serious damage.

Residents are preparing for the next fire season after last summer’s devastating megablazes threatened Douglas County on three sides.

About 72 residents participated in a Living With Fire session in Topaz Ranch Estates on June 7 to discuss preparing for wildfires and evacuations.

Alpine County is hosting a meeting 5 p.m. Tuesday at Turtle Rock Park to discuss the restoration and recovery from the Tamarack Fire.

The fire burned through the park itself, which has been turned back over to Alpine County after California completed debris removal operations.

Turtle Rock Park has served as the starting point for several cycling races, including next month’s 103-mile Death Ride. The fire, which raged out of control for weeks in the rugged mountains straddling the California-Nevada border, ended up burning more than 68,000 acres.

According to the California Governor’s Office of Emergency Services, contractors removed more than 95.2 tons of debris generated by the fire.

In preparation for the season, firefighters gathered on June 1 at Clear Creek.

East Fork Deputy Chief Larry Goss said the goal of the session that brought hundreds of firefighters to the exclusive community was to work on coordination for the season.

“We want to make sure we’re able to operate with each other going into fire season,” he said. “We want to get a feel for how a situation looks with the population that’s in here during the day.”