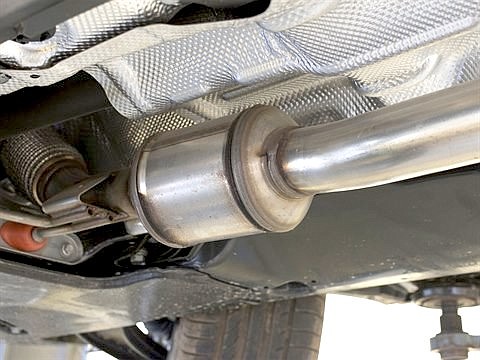 Catalytic converters are targeted by thieves who sell them to scrap yards.

Investigators are hoping someone spotted something that will help link a Nevada couple arrested last month with a number of stolen catalytic converters.

A silver Acura MDX that was suspected to be involved in the thefts was chased down by Mammoth Lakes police on June 23.

According to Mammoth Lakes police, witnesses saw three people cutting parts off a truck parked at an auto shop. The Acura matched a description issued in prior thefts at Mammoth Lakes.

Police chased the Acura to Highway 395, where the driver was traveling in the oncoming lanes and then onto several Forest Service roads before it stopped at Smokey Bear Flats. After finding the empty vehicle with several converters inside, police determined that four people had been inside.

Sparks resident Jean Anthony Henderson-Hamilton, 37, was spotted walking along Highway 395 and was taken into custody.

Fallon resident Deanna Kaye Douglas, 49, was taken into custody when she came to the station to retrieve personal property. The other two perpetrators have yet to be found, according to the Mammoth Lakes Police Department.

After exhausting all leads, authorities are asking the public for help in looking for more evidence of the thefts that happened in the Gardnerville area. Anyone with information about this crime is asked to contact the DCSO Investigations Division at 775-782-9905.

Catalytic converters are found underneath vehicles, and they are part of the exhaust system. They contain precious metals like platinum, rhodium, and palladium and are worth several hundred dollars per piece to thieves who sell the converters to scrap yards. It can cost up to $2000 to replace a catalytic converter, and it is illegal to drive a vehicle without one.