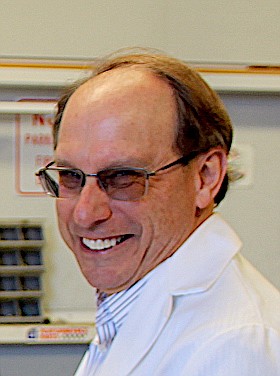 Just before Thanksgiving, Carson Valley Swim Center announced it had installed CopperDisinfector on their front doors.

In February, the U.S. Environmental Protection Agency announced that certain copper alloys are effective against viruses.

“New efficacy testing supported by the Copper Development Association and conducted according to EPA’s protocols  demonstrated certain high-percentage copper alloy products can continuously kill viruses that come into contact with them,” according to the EPA. “Based on testing against harder-to-kill viruses, EPA expects these products to eliminate 99.9 percent of SARS-CoV-2, the virus that causes COVID-19, within two hours.”

According to Hollander, rolls of the copper film come in three sizes and can be installed on surfaces people touch on a regular basis.

“The protective film of activated copper is easy to install and kills microbes up to 25 times faster than other copper surfaces,” Hollander said. “Copper ions attack and kill microbes on contact, significantly reducing the risk of contagion.”

Hollander said the product costs as low as $20 per door.

In a letter to East Fork Fire Protection District trustees, Hollander offered his ozone disinfection equipment to disinfect ambulances at no charge.

“We need to protect our first responders and the patients being transported,” Hollander said in the letter.

Hollander’s ozone system generates the gas inside a vehicle to kill viruses.

The Minden man has been working on germicidal disinfection products for 45 years and has several patents for his equipment.

He founded UVC LLC in 1999 to sell ultraviolet-C germicidal lamps and systems.

“His UVC for HVAC surface and air disinfection systems is the first of its kind, boasting the highest germ-killing power available at one-fourth the cost,” he said.