Boggs named Player of the Year 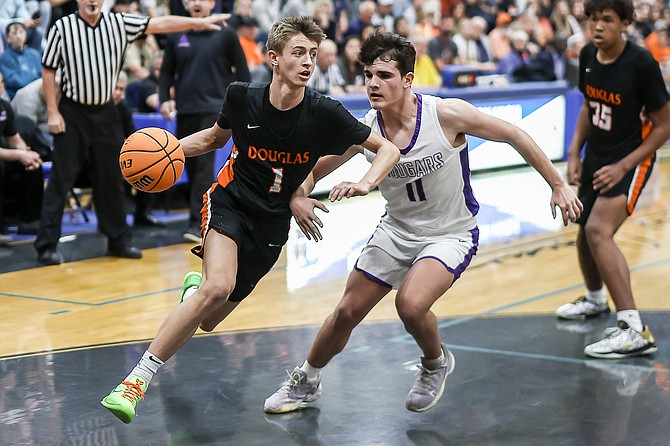 Kasen Boggs (1) goes up for a layup during a game this season. Boggs was named the Class 5A boys Northern Nevada Player of the Year on Sunday after leading the North in scoring during his senior season.
Photo by Ron Harpin.

In his lone season on the varsity floor, Douglas High’s Kasen Boggs let the rest of Northern Nevada take notice of his skillset.
The Tiger guard led the Class 5A North with 20.3 points per game and helped lead Douglas to its first regional championship under 16-year head coach Corey Thacker.
Like the rest of Nevada, Boggs didn’t have a junior season due to the COVID-19 pandemic.
For the season, Boggs shot 44 percent from the floor and hit 57 3-pointers in 26 games played.
Northern Nevada’s Class 5A North Player of the Year put together 5.8 rebounds per game, four assists per contest and 3.5 steals.
Boggs’ 90 steals were the most in the Class 5A North and his 103 assists ranked second.
Additionally, the 6-foot-3 senior had 19 blocks in his 26 games played.
Fellow senior, Chris Smalley, was awarded with a first team all-league selection despite missing the first few games of the season.
In 21 games played, Smalley averaged 11.2 points per game while shooting 52 percent from the floor.
Smalley was also one of the best on the boards, posting a clip of 7.4 rebounds per game.
The outgoing senior, and University of Nevada, Reno football signee, led the North in blocks with 34.
Both Boggs and Smalley had three double-doubles apiece during the course of the season.

Second team and honorable mention
Two other Tiger hoopers were honored with postseason recognition for their performance on the hardwood this past season.
JC Reid, a junior guard, picked up a second team all-league selection after posting an average of 8.3 points per game for Douglas.
The Tiger sharpshooter hit 43 triples this season with an average of 39 percent from beyond the arc. Reid also had the best mark from the charity stripe this season, hitting 85 percent of his free throws.
Rounding out Douglas’ all-league selections is senior Dakota Jones.
Jones earned an honorable mention nod for his play this season as one of Douglas’ defensive specialists.
Jones was second in the league behind Boggs in steals, swiping 75 in 28 games played.
Elsewhere, Jones averaged five points per game along with three rebounds and 2.3 assists per contest.