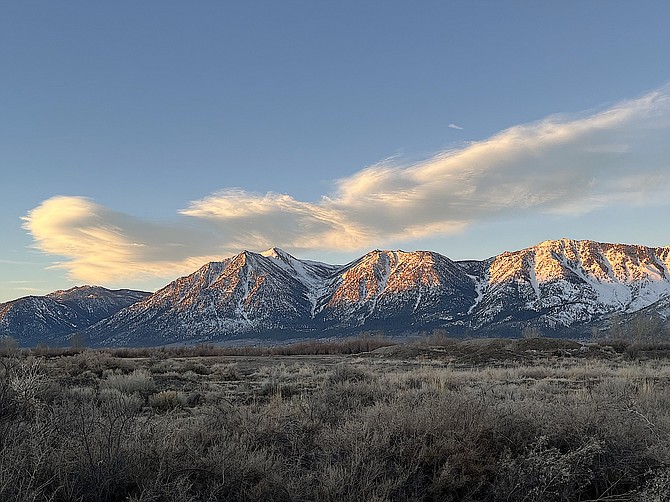 Frank Dressel sent in this photo of the sunrise illuminating the Sierra on Thursday morning.

Genoa, Nev. — There were 27 people who took the opportunity on Thursday afternoon to tour the Carson Valley Community Food Closet in Gardnerville. They're always looking for volunteers. You can find out more at www.thefoodcloset.org

The Thursday wreck was 4:44 p.m. at Highway 395 and Lampe near the Gardnerville Raley’s. It snarled traffic, but no one opted for an ambulance ride, so that’s good. Let’s be careful out there, please.

For what I believe is the first time since the pandemic hit nearly two years, the masks are off in Douglas County courts. I attended an arraignment on Thursday, and I think even the defendant’s spirits were buoyed a bit by the small measure of freedom afforded by going maskless.

I know the headlines are all saying the mask mandate has been rescinded, but it’s not universal and not everyone works for the governor. It will take a little while for word to filter down in some outfits, and some folks are going to be more comfortable wearing a mask in certain situations.

Emergency facility problems have prompted the suspension of the Valley Express between Lake Tahoe and Gardnerville today, according to the Tahoe Transportation District. Routes 22, 50 and 55 are also suspended. They hope to resume service on Saturday.

Carson Valley flower and sweet shops are ramping up for Valentine’s Day on Monday, which for them is Black Friday, Christmas and a year’s worth of weddings, all rolled into one.

Expect sunny skies today with the high climbing to 63 degrees, which will essentially continue through the weekend. The barest chance of precipitation has backed up to just after midnight on Tuesday with a chance of snow in the morning.