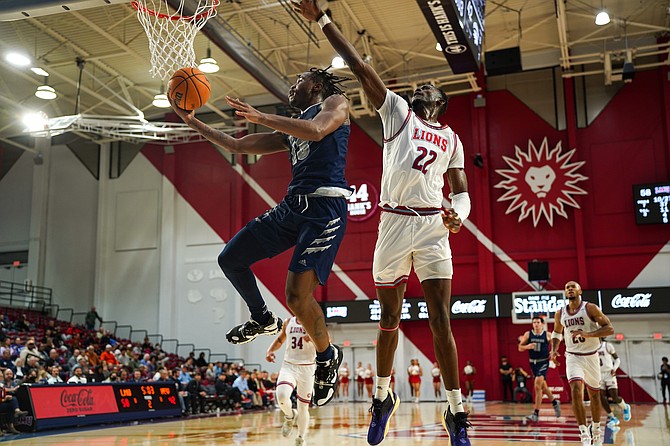 Coach Steve Alford’s men’s basketball team has saved 2022 from being one of the worst calendar years ever for the Nevada Wolf Pack’s two most high-profile sports. The basketball team, winners of 10-of-13 games since November, has mercifully softened the blow of a thoroughly demoralizing year for the Pack football and (2021-22) men’s basketball teams. The two Wolf Pack teams that fuel the all-important athletic budget and shape the psyche of the Northern Nevada sports community were an ugly 9-23 combined in the year 2022 before Alford’s team came to life in November. Alford’s Pack was 7-13 from Jan. 1 to March 10 (and then lost its top three players to the transfer portal in the spring) and Ken Wilson’s football team was 2-10 this fall. The two combined for nine wins through October, less than one a month. The suffering for Pack fans seemed endless. But Alford’s Pack has since gone 10-3 (with two games remaining in 2022 this week) to give the football and men’s basketball teams a combined record of 19-26 this year. Thanks to Alford’s new team the last two months there is indeed hope for 2023.

How good is this Wolf Pack basketball team? We’ll find out for sure the next two months as some reinforcements (namely K.J. Hymes and Daniel Foster) return and get in basketball playing shape. Alford went out and found some quality newcomers last spring and summer (namely Jarod Lucas and Darrion Williams) and has squeezed even more potential and production out of returnees Kenan Blackshear, Tre Coleman and Will Baker. Make no mistake, this a fragile, young, thin, inexperienced and, at times, one-dimensional team, so Alford is clearly earning his million bucks this year. The overall success of this team will depend on Alford’s ability to continue to develop this group and keep its head above water when it seems like it is about to drown.

It was feared that the loss of Grant Sherfield, Desmond Cambridge and Warren Washington after last year would devastate the Wolf Pack basketball program, at least for a year or two. And the Pack’s 10-3 start, to be sure, has masked those fears so far. But Sherfield is averaging 18 points, 3.8 assists and 2.8 rebounds and is draining 56 percent (35-of-62) of his threes for the 9-3 Oklahoma Sooners. Cambridge (11.5 points, 1.7 steals, 3.4 rebounds) and Washington (8.0 points, 2.0 blocks, 7.1 rebounds) are both performing well for the 11-2 Arizona State Sun Devils. Alem Huseinovic, yet another ex-Pack player off last year’s roster, is averaging 7.4 points and 1.8 rebounds off the bench for the 9-3 Rice Owls.

It turns out the San Francisco Giants might have known what they were doing after all when they put the brakes on their deal with shortstop Carlos Correa because of issues with Correa’s past injuries. The New York Mets now, it seems, have the same concerns. The Giants have since gone out and signed ex-Met outfielder Michael Conforto, who has had injury issues of his own and hasn’t even stepped on a field since 2021. Another Giant off-season signing is ex-Reno Aces outfielder Mitch Haniger, who has also battled injury problems.

The difference, though, between Haniger and Conforto and Correa is huge. Conforto and Haniger will cost the Giants just a combined $79 million for five years while Correa’s price tag was $350 million for 13 years. Correa’s signing would have changed the course of the Giants off the field for at least the next decade. Signing Correa is like buying a winter home on 200 acres in France. It had better be perfect. The signing of Haniger and Conforto is like trading in your 2012 Toyota for a 2019 version. It’s OK if it has a few dents.

What, exactly, was former Giants manager Bruce Bochy thinking when he accepted the Texas Rangers’ manager job? Bochy will be 68 years old this coming season and hasn’t managed since 2019. He hasn’t won a World Series since 2014. He’s taking over an underachieving Rangers team that went 68-94 last year, going 34-47 both home and away. Yes, the Rangers signed Jacob DeGrom and fellow pitchers Nathan Eovaldi, Andrew Heaney and Jake Odorizzi this off-season. So, OK, they might go 78-84 this year as DeGrom, Eovaldi, Heaney and Odorizzi spend half the year on the injured list. Bochy, who is already on his way to the Hall of Fame, should have stayed retired in Nashville, listening to country music.