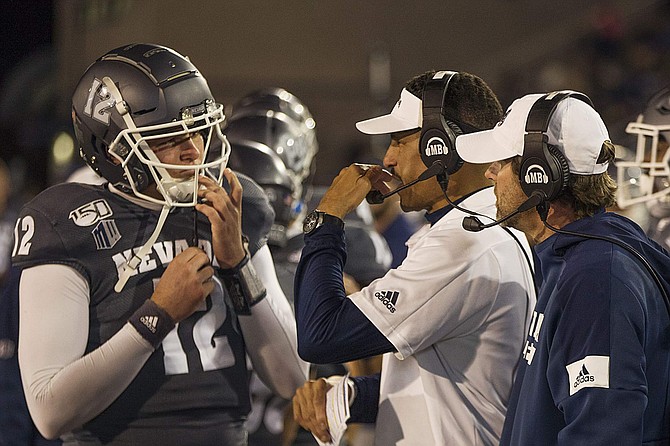 Mississippi State football coach Mike Leach, who passed away on Monday at the age of 61, had a tremendous influence on Nevada Wolf Pack football the past six years. It’s just too bad the Wolf Pack never hired him. Former (2017-21) Nevada coach Jay Norvell’s entire offensive philosophy came from Leach. Oklahoma head coach Bob Stoops, a former Norvell teammate at Iowa, hired Leach as the Sooners’ offensive coordinator in 1999. Leach proceeded to transform Oklahoma and Big 12 football with his high-flying, attack-at-all-times Air Raid offense. Stoops then hired Norvell at Oklahoma as his offensive coordinator in 2008 and helped indoctrinate Norvell in the Air Raid. Matt Mumme, Norvell’s offensive coordinator at Nevada, learned the Air Raid from his father Hal and Leach. It was Hal Mumme and Leach, after all, who developed the Air Raid (Leach came up with the name) when they coached together in the late 1980s and early 1990s at Iowa Wesleyan, Valdosta State and Kentucky.

Leach’s influence on Wolf Pack football, though, certainly didn’t end when Norvell and Mumme went to Colorado State after the 2021 season. Leach, after all, is likely a big reason why Ken Wilson is now the Pack head coach. Wilson, his career at a crossroads after head coach Chris Ault retired at Nevada in 2012, resurfaced under Leach at Washington State from 2013-19. Jim Mastro, at Nevada with Wilson from 2000-10, had joined Leach’s staff at Washington State the year before Wilson and was undoubtedly a huge reason why Leach hired Wilson. Mastro is the Pack’s biggest and deepest connection to Leach. The two became lifelong friends in 1987 at Cal Poly when Mastro was a running back and Leach began his coaching career as the Mustangs’ offensive line coach. Mastro is also likely a huge reason why Oregon hired Wilson in 2020 after Leach left Washington State to become the head coach at Mississippi State. Mastro, after all, was already on Oregon’s staff when the Ducks hired Wilson. Wilson then repaid Mastro for his loyalty and friendship by hiring him as the Pack’s operations director last January.

Leach’s influence on Nevada can also be found with current offensive coordinator Derek Sage, who coached Washington State’s wide receivers in 2017, and also with linebackers coach Mike Bethea, who was a graduate assistant at Washington State from 2013-15. There would have been no Air Raid at Nevada under Norvell if not for Leach. Wilson might not have ever become a legitimate head coaching candidate at Nevada if Leach never hired him at Washington State. Wolf Pack football, there’s no doubt, would look a whole lot different than it does now off the field if not for Leach‘s influence. The goal now at Nevada, of course, is to make sure the product on the field has just as much influence from Leach.

College football, unfortunately, will never be the same without Leach.

Leach, who was born in Susanville, Calif., and grew up and went to high school in Cody, Wyo., was a coaching unicorn. Leach had a dry wit that was unmatched in any profession but especially in college coaching. Forget football. He would much rather talk about pirates and what he called “swinging your sword,” as well as Geronimo and native Americans, world history and events and what it took for a successful marriage. He never played college football, instead choosing to be a rugby player at BYU. But he also talked his way onto the BYU sideline at practices and the coach’s film room under legendary coach LaVell Edwards and learned all about the initial stages of the Air Raid. He then talked his way into his first coaching job at Cal Poly under head coach Lyle Setencich. Leach could have likely talked his way into becoming the next president of this country if he put his mind to it. His Wyoming upbringing and down-home common-sense values always made him not just another boring, conceited, know-it-all, how-dare-you-question-my-decisions millionaire football coach that dominate the sport these days. Leach was your lifelong buddy, a guy with whom you’d love to share a beer and a sandwich. But at the same time, he was almost always the smartest, funniest and most well-liked man in the room. There might never be another Mike Leach in college football.

The 2008 Texas Tech game at Mackay Stadium pitted two of the most innovative coaches in recent college football history with Leach’s pass-happy Air Raid going against Chris Ault’s run-based Pistol. It was a wild, crazy, goofy night and, yes, a pure, unadulterated Mike Leach circus. On the very first drive of the game Leach, facing a 4th-and-1 at his own 30-yard line, went for a first down and came up short, basically handing the Pack a field goal and a 3-0 lead. The Wolf Pack intercepted Texas Tech quarterback Graham Harrell, a Heisman Trophy finalist after the season, twice. The Pack blocked a Texas Tech field goal and Texas Tech blocked a Pack punt. Graham found wide receiver Michael Crabtree for an 82-yard touchdown in the third quarter and four plays later Pack quarterback Colin Kaepernick connected with wide receiver Marko Mitchell for a 48-yard touchdown. Harrell passed for 297 yards while Kaepernick passed for 264 and ran for 92 and, for one night at least, deserved more Heisman attention than Harrell. Crabtree caught eight passes for 158 yards, while Mitchell caught eight for 147. Texas Tech sacked Kaepernick, one of the most elusive quarterbacks in the history of college football, four times. The Pack, despite getting 46 chances, never sacked Harrell, one of the most immobile quarterbacks in the history of the sport, once. Eric Morris (see next item) returned a punt 86 yards for a Texas Tech touchdown. Kaepernick had a 40-yard run and three plays later threw an interception. He would later fumble the ball away at the Texas Tech 1-yard line. Pack kicker Brett Jaekle attempted six field goals and made four, one short of the Pack record. Nothing was ever boring with Mike Leach around.

Eric Morris, one of Leach’s Air Raid wide receivers at Texas Tech from 2004-08, was the head coach at Incarnate Word in 2019 when he scheduled a game for 2022 against Norvell and the Wolf Pack at Mackay Stadium. Morris, who also coached under Leach at Washington State in 2012, went 10-3 with Incarnate Word in 2021 and left to become Washington State’s offensive coordinator in 2022. Norvell also left Nevada after the 2021 season to become Colorado State’s head coach. That left Wilson and the Pack to contend with Incarnate Word at Mackay in the third game of the 2022 season. Incarnate Word, an FCS team, stunned the Wolf Pack, 55-41, back in early September, piling up 616 yards of offense that included four passing touchdowns. The loss was the first of 10 in a row that the Pack will carry into next season. Incarnate Word’s offensive coordinator that day was Mack Leftwich, who coached under Leach disciple Morris at Incarnate Word from 2018-21. So, yes, in addition to Wilson becoming the Pack head coach, you can also blame Leach (sort of) for the Pack’s current 10-game losing streak.

The Mike Leach connection with the Wolf Pack even extends to the Pack’s former quarterbacks. That connection came into play on Tuesday with the Arizona Cardinals signing former Pack quarterback Carson Strong to their practice squad. Cardinals head coach Kliff Kingsbury played for Leach at Texas Tech in 2001 and 2002 and currently runs the NFL version of the Air Raid with the Cardinals. Strong, who was signed by the Philadelphia Eagles as an undrafted free agent after the 2022 draft, was waived in late August. Don’t be shocked if Strong, who was raised in the Pack’s Air Raid under Norvell and Mumme, makes his NFL debut before this season ends. The Cardinals, after all, recently lost starting quarterback Kyler Murray to a season-ending knee injury, and Kingsbury, whose job might be on the line after the year, might want to give Strong a look in a game situation.

It raised an eyebrow or two (in Northern Nevada, at least) when the San Francisco 49ers didn’t take Strong with the final pick of the NFL draft back in April. But those eyebrows are no longer raised. The 49ers instead selected Iowa State quarterback Brock Purdy and, well, so far the pick might have saved their season. Purdy, after all, just beat Tom Brady and the Tampa Bay Buccaneers in Santa Clara this past Sunday, 35-7. Purdy isn’t the only quarterback from the 2022 draft that didn’t include Strong who has played well at times this year. Kenny Pickett, a first-round pick, has thrown for 1,797 yards and four touchdowns for the Pittsburgh Steelers. Malik Willis, a third-round pick of the Tennessee Titans, has passed for 157 yards in four appearances and two starts. Desmond Ridder, a third-round pick, has replaced Marcus Mariota as the Atlanta Falcons’ starter. Even Skylar Thompson, a seventh-round pick out of Kansas State (he beat Strong and Nevada in 2021), has gotten into five games with the Miami Dolphins and passed for 278 yards. Bailey Zappe, a fourth-round pick out of Western Kentucky, has made two starts for New England, passing for 781 yards and five touchdowns in four appearances. Strong couldn’t even get a job on somebody’s practice squad until this week.