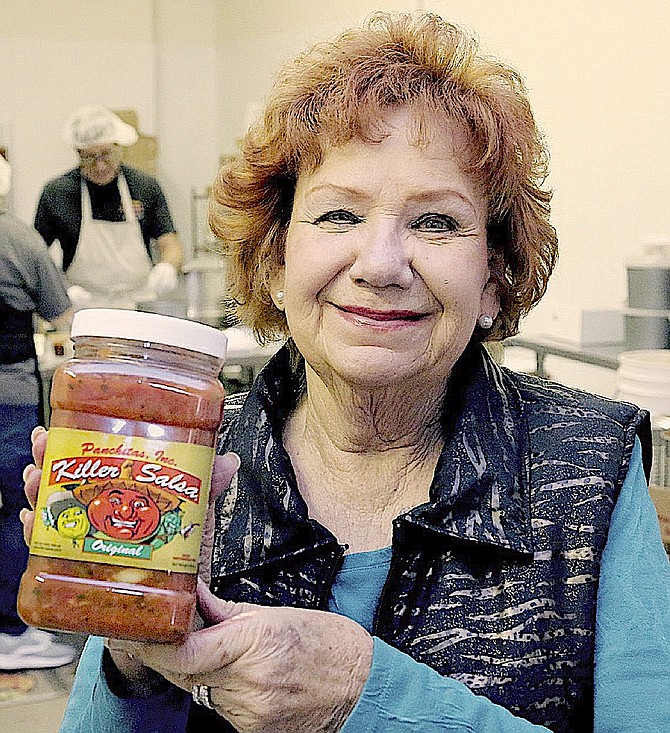 Fran Pritchard in 2018 with a jar of her Killer Salsa. Jim Grant | R-C File Photo

A celebration of the life of Carson Valley entrepreneur and Killer Salsa maker Fran Pritchard is April 30 in Minden. Pritchard died March 13, 2022.

Pritchard, 78, started making and selling her salsa in 1993 with a spot at the old Deli Stop in Minden.

Pritchard described starting her business to Record-Courier reporter Dave Price in 2018 for her 25th anniversary.

“I went around to the different grocery stores in the local area and talked to the store managers,” she said. “I carried my little bag of chips, my little pint of salsa and my business card.”

She sold 14 pints of salsa on her first day of business, Super Bowl Sunday 1993.

While she started small, she credited Scolari’s for helping her break through.

“I was only selling to mini-marts and little convenience stores, and someone told me that Scolari’s was good about promoting made-in-Nevada products,” she said. “I was driving around Reno and I decided to stop at Scolari’s headquarters.”

She didn’t have an appointment, but it turned out the person she had to talk to had just had a cancellation.

“I went in to talk to him and he says, ‘OK, we’ll give you one store in Gardnerville and see how we do.”

She was named Made in Nevada Woman of the Year on March 24, 2007. In 2009, she donated a case of Killer Salsa to the U.S. Air Force’s 455th Civil Engineering Squadron in Afghanistan, which sent her a photo saying “Your salsa is killer.”

The next year she sold the business so she could enjoy retirement, her family said.