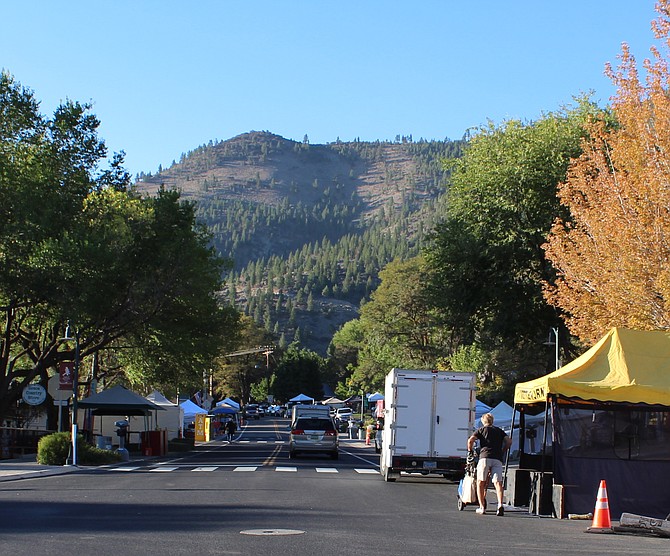 Downtown Genoa is busy on the Friday morning before Candy Dance.

Genoa, Nev. — The hustle and bustle of final preparations for this weekend’s Candy Dance will dominate as crafters begin to arrive in Genoa today. All the motorcycles were parked along Main Street on Thursday evening, and I expect they’ll be back tonight as Street Vibrations shifts into high gear.

For those seeking a quieter experience, Friends of Hope Valley are hosting Aspen Day 2021 10 a.m. to 3 p.m. Saturday on Blue Lakes Road. I spotted a little color up that way on Thursday. The Craig Crow Band will be performing 1-3 p.m.

Douglas High and Pau-Wa-Lu Middle schools may be taken off the coronavirus outbreak list today. Thursday was the 28th day since an outbreak was declared and school officials are confident they’ll be able to lift the mask requirement for students at those schools.

Douglas County had three deaths attributed to the coronavirus over the past week, health officials reported on Thursday evening. That brings the toll from the virus to 47 since the first death was reported in August 2020. Nine people have died from the virus over the last month, according to Carson City Health and Human Services.

Firefighters rushed to Harvey’s for a small fire that was quickly doused around 7 p.m. Thursday. There was smoke coming out from the loading dock for the fire believed to be in the subbasement.

It’s going to heat up for Candy Dance weekend and we may see some smoke as the winds shift back to the southwest over the weekend and temperatures climb to 10 degrees above average. We could see some weather next week, but I wouldn’t put money on it.

Expect sunny skies and a high of 85 degrees with the wind out of the north at 5-10 mph. Smoke is supposed to return with the wind shift tonight after 10 p.m. and will be hanging about in parts of the Valley through the weekend.