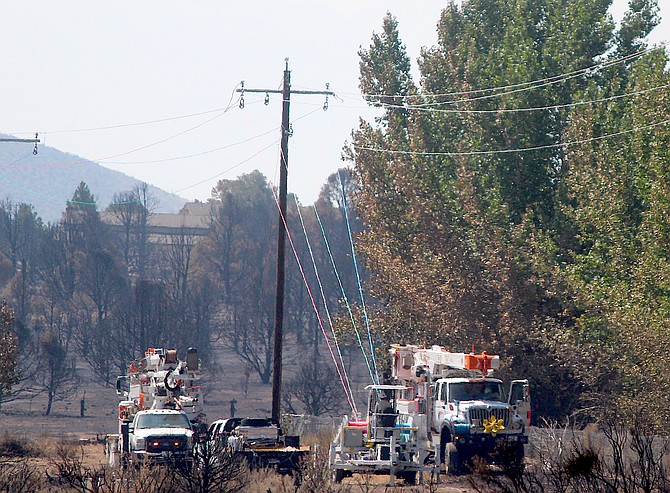 NV Energy linemen string wire just north of Holbrook Junction after a section of power poles and line was destroyed in the Tamarack Fire.

Douglas County residents are gathering on Sunday to help those who lost their homes in the Tamarack Fire.

The Tamarack Turnaround Fire Relief Fundraiser is designed to help the residents of nearly a dozen homes destroyed after the fire burned into the Pine Nuts.

The fundraiser is scheduled for 11 a.m. Sunday at the Carson Valley Country Club in Gardnerville.

They’ll be serving pasta from noon to 3 p.m. There will be live dancing on the patio after lunch. Tickets are $25 in advance or $30 at the door.

The group is raising money for those displaced by the fire.

Organizer Ridgely Elisabeth Eastman said there is no overhead, and all the proceeds will be split evenly among the victims.

He said the total estimated cost to fight the fire has reached $30 million, making it the most expensive fire in Douglas County history and the second largest after the Bison Fire. The fire was started by lightning on July 4. Forest officials decided it didn’t pose a threat. On July 16, it began to spread rapidly toward Markleeville, surrounding the tiny town.

It continued to gain ground through the weekend and five days later crossed into Douglas County where it destroyed homes along Highway 395 and Holbrook Junction.

Carlini said that 185 Alpine and Douglas residents sheltered at the Douglas County Community Center for a week and 235 south county residents were sheltered at Smith Valley High School for six days.