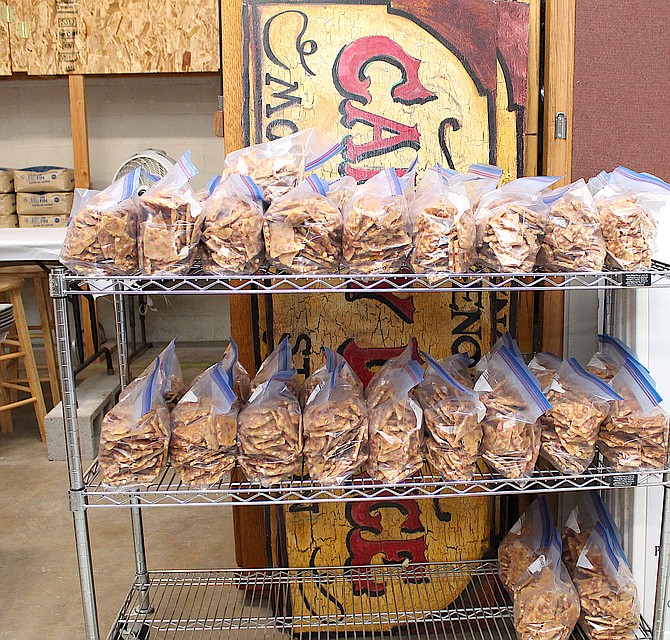 Rows of peanut brittle are bagged at the Genoa Town Hall on Wednesday morning as candy makers work to create more than a ton of confections to sell at next month's Candy Dance.
Photo by Kurt Hildebrand.

Tickets are still available for the annual Candy Dance dinner in Genoa Park on Sept. 25.

As of Friday morning, Town Manager Matt Bruback said more than two-thirds of the 500 tickets the town had hoped to sell have already been purchased for the 102-year-old tradition.

Tickets may be purchased online at www.genoanevada.org.

Lake Tahoe musician Miranda Rae Love is performing at the annual Candy Dance and Dinner on Sept. 25, which is being catered by Carson City BBQ.

The Three’s A Crowd Band will also be performing in Genoa Park.

Most of the $75 seats available to 1919 Society have been filled, according to the town’s web site, with 11 remaining as of lunchtime on Friday.

There were another 130 of the $45 seats remaining to be sold.

The dance and candy are the historic aspects of the annual event, which is set for next weekend in Nevada’s Oldest Town.

Candy-makers have been working for the last month to produce a ton and a half of the confections that are sold at the two-day craft fair that will close the town 7 a.m. to 7 p.m.

The fair, founded in 1974, raises the majority of the money that supports the town with 300 vendor booth rentals.

Parking lots are located at the three entrances to the town, including Genoa Lane, Foothill Road and Jacks Valley Road. Shuttle buses transport visitors from parking to town where craft and food booths are.

Highway 395 will have traffic control at Genoa and Muller lanes, with no left turn permitted either onto or off of Genoa Lane. Visitors coming from the south should use Muller Lane. Visitors from the north may use either Genoa Lane or Jacks Valley Road, though parking at the Genoa Cemetery is limited.