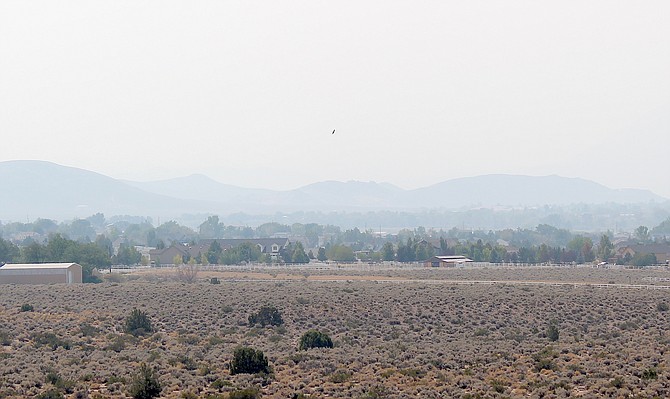 The Pine Nuts are barely visible from Fish Springs Road on Friday afternoon.

Visibility dropped to 2.5 miles around 10:15 a.m. Friday morning as drift smoke from fires burning near Sequoia National Forest in the southern Sierra arrived in Carson Valley.

The air cleared a little bit on Friday afternoon, reaching seven miles at 2 p.m., according to the Minden-Tahoe Airport weather station.

Air quality remained in the moderate range through the day.

There was virtually no wind over the course of the day, so far.

That’s liable to change on Saturday afternoon as a fire weather watch was upgraded to a red flag warning 1-8 p.m.

According to the National Weather Service in Reno, southwest to west winds at 15-30 mph are expected, with gusts of 35-45 mph. The humidity is expected to be 8-15 percent.

“The combination of gusty winds and low humidity can cause fire to rapidly grow in size and intensity before first responders can contain them,” forecasters said.

Winds will continue to gust into Saturday night in wind-prone locations.

As of 2:30 p.m., a public safety outage watch was still in the cards for Genoa, Clear Creek, Glenbrook, Kingsbury and Round Hill. NV Energy said depending on the weather, the outage could go into effect at 8 p.m. Saturday and last until 8 p.m. Sunday affecting as many as 15,000 power customers.

The red flag warning is in place for much of Western Nevada, except extreme southern Douglas and Lyon counties and the southwestern portion of Mineral County, where a fire weather watch is in effect noon to 8 p.m. Sunday. A lake wind advisory is in effect for Markleeville 11 a.m. to 8 p.m. Saturday and a fire weather watch goes into effect noon Sunday.

A cold front is expected to bring a chance of rain to Carson Valley late Saturday night until noon Sunday.