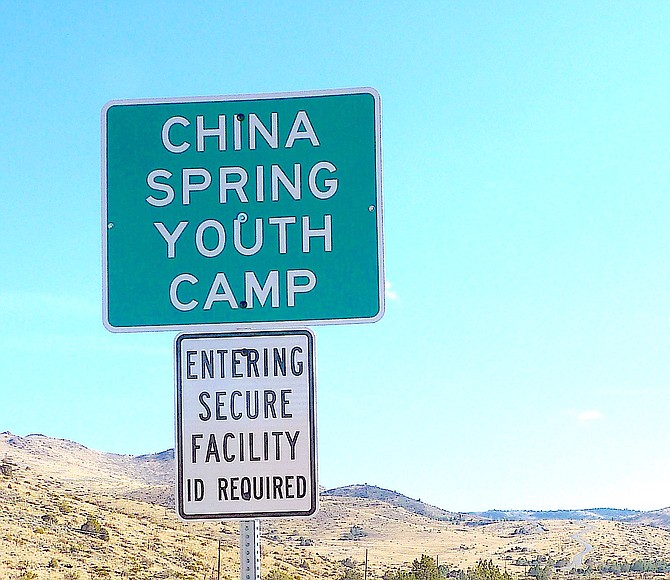 The entrance to China Spring Youth Camp located south of Gardnerville in the Pinenut Mountains.
Photo by Kurt Hildebrand.

Officials are working on a means to support China Spring Youth Camp as the state withdraws funding for the Pine Nut facility that serves 16 of Nevada’s 17 counties.

Douglas County commissioners are being asked Thursday to approve the use of the anticipated general fund balance to help tide the camp over through the next two fiscal years after the Legislature started reducing funding.

More information on the meeting is available at www.douglascountynv.gov and clicking agendas and meetings.

In part because of the coronavirus outbreak, the number of students sent to the camp by other counties was reduced and resulted in the boys side being closed for a short time.

A China Spring Working Group has been formed by the Nevada Association of Counties to work out ways to fund the camp after the state decided they should provide more funding.

Douglas is asking the other counties to help make up the current year’s shortfall.

In the alternative, the county is asking for funding based on the other counties actual use of the camp in 2019, before the outbreak hit.

“For a long-term funding model, some combination of student population and historic utilization may be the most equitable way for the 16 counties to fund their portion of the China Spring Youth Camp budget,” county officials said.

Washoe County accounts for 57 percent of the students at the camp, with Elko coming in second with 8.29 percent.

Clark County funds a boot camp that legislators noted costs less, but also does not offer anywhere near the services China Spring does.

China Spring also offers behavioral healthcare services, including services for people who have a substance use disorder as well as a mental health disorder.

The camp accepts offenders ages 12-18 from every county except Clark, which has its own juvenile program. Those juveniles sent to China Spring cannot be convicted of a felony. The camp’s capacity is around 60.

Located in the Pine Nut Mountains south of Highway 395, the camp originally opened on Aug. 1, 1983. The 40-acre camp site was donated by rancher Stoddard Jacobsen.

Curious if China Springs or related groups are using personal residences in area to keep some of these 12-18 year old's? Funny business is going on in a home near where we live at Chichester. Different children coming and going all the time. Trafficking's, drugs - it is not normal or legal in our community. If some type of organization, church or whatever is doing this I will expose you soon....SO STOP and get these kids OUT of here.