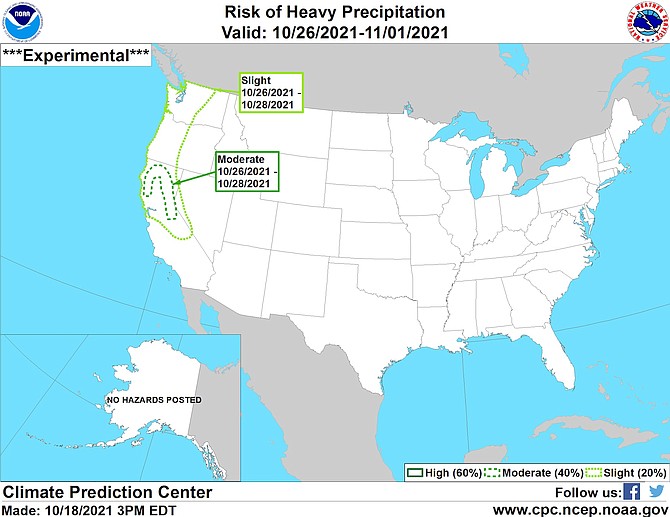 Despite the multiple craft fairs popping up, it’s not quite Christmas yet, but there’s a big candy cane in the form of heavy precipitation in the forecast for Oct. 26-28.

An experimental forecasting tool produced by the National Weather Services Climate Prediction Center shows a moderate risk of heavy precipitation for a hook-shaped area from northern Mono County all the way to the California state line and then back south again along the northern coast. The dotted line passes through the Tahoe Basin and the Carson Range on its easternmost side.

The same forecast issued on Monday afternoon shows a slight chance of heavy precipitation all across the West including much of Western Nevada.

The 8-14-day precipitation outlook for Western Nevada and the Central Sierra is running 40-50 percent, according to the National Weather Service.

Whether that translates into actual moisture will be another question entirely.

According to a statement issued by the National Weather Service on Monday afternoon, a quick weather system will blast through the region Tuesday night to Wednesday morning, bringing 30-45 mph winds early Wednesday morning.

“Expect some light snow to begin in the Sierra Tuesday evening with a period of heavier snow late Tuesday night and early Wednesday morning,” forecasters said. A few inches of snow is expected over the Sierra passes with light amounts sticking to roads around the Tahoe Basin as low as 5,500 feet.
Another system forecasters described as “fairly modest” is in the works for Friday with the possibility of a much stronger system for next weekend.

Forecasters say that storm is expected to be warmer than the ones that already brought snow to the Carson Range, with snow levels climbing to 7,000-8,000 feet. The mountains could see some Sierra cement with soaking rains at lower elevations.