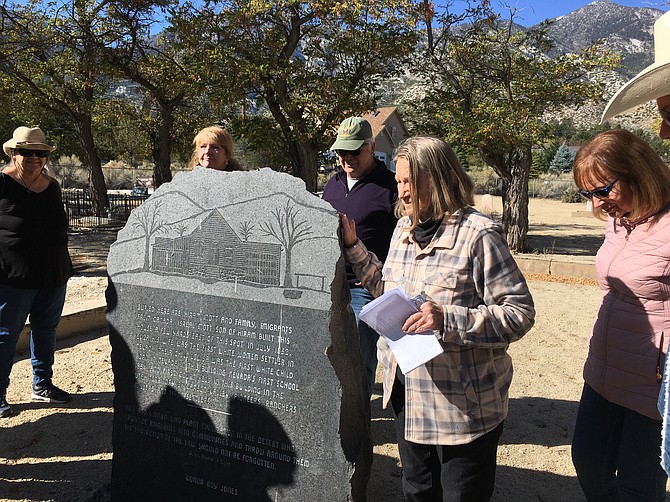 Laurie Hickey talks about the Mott family, for whom Mottsville and the Mottsville Cemetery are named.
Photo by Kurt Hildebrand.

About three dozen people turned out to tour the Mottsville Cemetery on Oct. 9.

Foothill resident Laurie Hickey conducted the tour as a fundraiser to purchase wreaths and flags to place on the graves of veterans buried in the venerable bone yard.

Named after settler Hiram Mott, Mottsville was founded along the Emigrant Trail around the same time as Genoa in 1851. It was one of the stops along the trail to the California gold fields that included Sheridan, Fairview and Fredericksburg.

“My grandmother worked for Mrs. Mott,” Hickey said. “You know, I’ve lived here all my life, and I never asked my grandmother exactly where the house was.”

The cemetery was one of the first in Nevada having been established in 1854 when Mary Elizabeth Mott died as a child.

“Mary Elizabeth passed away and was buried in the back yard,” Hickey said. “It wasn’t a planned thing. It just sort of happened.”

Mary Elizabeth was the daughter of Eliza and Israel Mott and the grand daughter of Hiram Mott.

Eliza Mott was the first female European settler in Carson Valley, and started the first school in her kitchen, Hickey said.

Most of the people, including the entire Mott clan, buried in the Mottsville Cemetery were related.

“Around here, everyone was related and that’s why they call it Cousin Valley,” she said. “There weren’t that many people here. Most of the early settlers still have family here or near Carson Valley.”

Like most of the old waystations, Mottsville had a store, a post office and a school, in addition to a scattering of homes.

“They would sell eggs or whatever they had,” Hickey said.

By 1875, when A.C. Pratt founded the Carson Valley News, there was no mention of the post office or store, but the newspaper reported the honor roll for the Mottsville School which listed William and John Cosser, Nettie, James and William Van Sickle.

The school hosted community events such as weddings, dances and funerals.

The Mottsville School building was put up for auction in 1930 after the district was consolidated with Gardnerville.