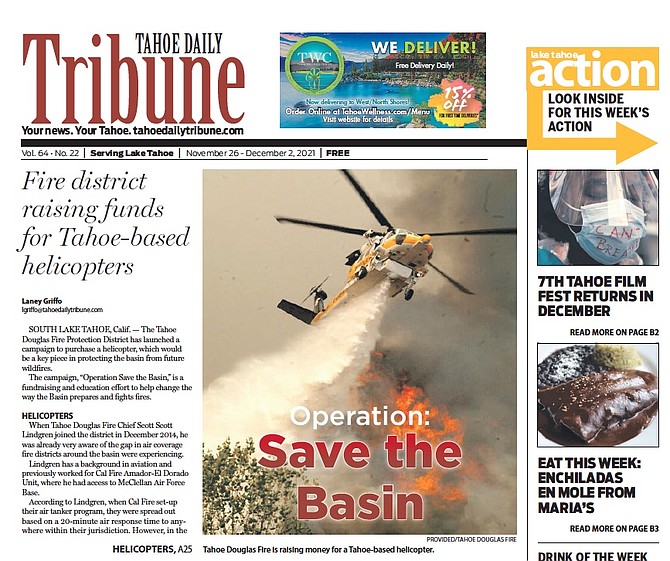 “We are the proud successor owners of a great newspaper in the Tribune that has served its community so well for decades,” said Ogden Newspapers CEO Robert Nutting. “The Tribune has a legacy of strong local journalism that we are privileged to continue.”

Based in West Virginia, Ogden Newspapers is a family-owned company founded in 1890 and is the principal owner of the Pittsburgh Pirates.

“The publications, communities and most of all the great people who have been a part of our company since its founding in 1975 will be very much missed,” said Swift CEO and Chairman of the Board Bill Waters. “We know the time has come to pass the baton of stewardship to new owners who can carry forward the important mission.”

The purchase of the Tribune is part of a larger acquisition of Swift Communications newspapers, magazines and digital properties being made by the Ogden Newspapers.

The Record-Courier and Nevada Appeal are former Swift newspapers, having sold to Nevada News Group in 2019 after 31 years with Swift.

“We also are excited for the opportunity to work with and serve the businesses in these markets to help them continue to get their message in front of customers,” Nutting said. “Our company’s goal is to be a positive force in the communities we serve. We believe that strong, responsible and connected local newspapers are critically important to building and supporting strong communities now more than ever.”

Ogden will continue to operate the existing Swift publications under the name Swift Communications. After the close date, Swift will change its name to Questor Corp. Acres USA and Breaking Ground Institute will be part of Questor along with a portfolio of commercial and residential real estate properties in various states.