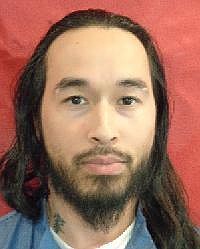 Ciro Comacho III is serving life in prison with the possibility of parole in 55 years on sexual assault and child pornography charges.

An appeal of a convicted child rapist's multiple life sentences was denied on Monday after a judge ruled his attorney was competent.

Ciro Comacho III, 37, admitted to charges of sexual assault on a 3-year-old girl and two counts of use of a minor in producing pornography and was sentenced Sept. 27, 2018.

During a July 16, 2018, canvass Camacho was told by District Judge Tod Young that he could face three life terms with a minimum parole eligibility of 55 years.

Under the agreement where Camacho pleaded guilty, he avoided federal child pornography charges. He was told at the time of his plea entry that he would not be eligible for probation and that he would have to register as a sex offender if he is ever released.

He was also warned that his sentences could be ordered to be served consecutively, which they were. According to Nevada Department of Corrections, he’s not due to expire his first life term until 2072.

The Nevada Court of Appeals has already upheld his sentences in an October 2019 ruling.

In that appeal, Camacho contended that Young improperly imposed a long sentence and a $200,000 fine as cruel and unusual.

The court ruled that the sentence was within the statutory limits, and therefore not cruel or unusual, unless the law was found to be unconstitutional.

“The district court acknowledged that Camacho had a difficult childhood, suffered mental health issues and served in the military,” the appeals court ruled. “However, the district court noted Camacho sexually abused a 3-year-old girl and concluded an aggregate sentence of life in prison with the possibility of parole in 55 years was the appropriate sentence.”

At Monday’s hearing, Camacho attempted to claim his attorney was incompetent. The denial of the post-conviction appeal may itself be appealed.

The child’s mother, Umi Hongo, 27, who brought the girl to Douglas County at Camacho’s request, is also serving multiple life terms that will keep her locked up until 2098 at minimum.

Both Camacho and Hongo were indicted by the 2018 Douglas County Grand Jury.