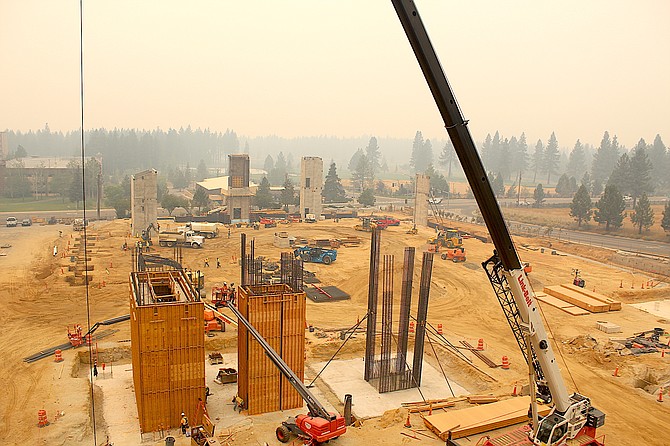 Workers at the site of the Stateline Events Center on Thursday.

Despite smoke from the Tamarack and Caldor fires, evacuations and weather delays pushing back construction, work on the Tahoe South Events Center has mostly stayed on track.

Crews lost an estimated 17 days due to fire and five due to the early winter storm in October, but according to Rick Kozuback, president and CEO of International Coliseums Company, which is overseeing construction of the project, they are close to making up those days.

The original timeline set Oct. 15 as the day steel erection would be complete, including stairs, beams and trusses. Crews started steel erection on Monday, and because the weather has been favorable, they are quickly making up for lost time.

Kozuback said that while it would be much better to not have to erect steel in the snow, if the weather turns soon, crews are capable and willing to do so.

In addition, they’ve started winterizing the site so construction can continue through the winter. They’ve laid down mulch and silt fences to keep water from flooding the area.

They’ve also poured asphalt in all the working areas so that they can use heavy equipment without damaging the ground. Kozuback said for people driving by the site, the asphalt may look like a giant parking lot but it will in fact be the future site of the arena.

Kozuback added that some of the subcontractors have experienced staffing shortages but it hasn’t caused any further delays.

The $80 million event center is a 143,000 square-foot, multi-use facility that will host concerts, conferences, sporting events and more.

Ground broke in July 2020 and its anticipated economic impact to the entire community is estimated to be $40-60 million per year, said a press release from the Tahoe Douglas Visitors Authority.

The delays have shifted the opening date slightly, from late December 2022 to early January 2023 but the project remains on budget.

“It’s been interesting and challenging but fun and exciting to see this come to fruition,” Kouzback said.