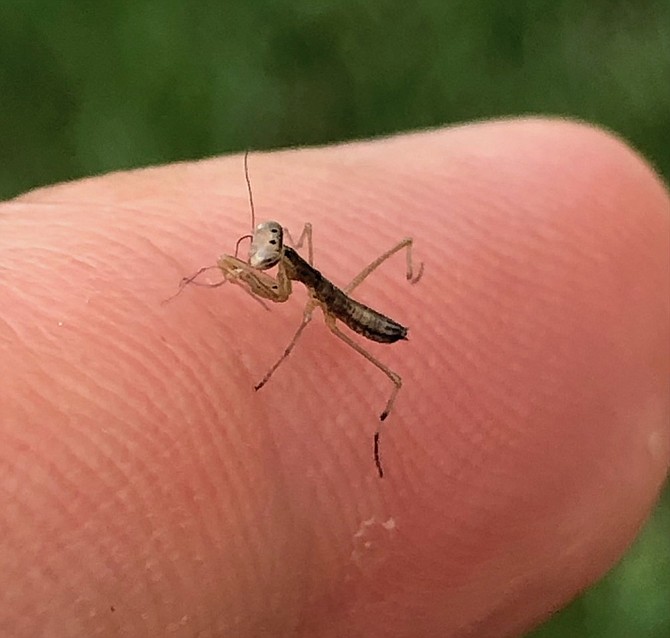 Back in early March, I was trimming a juniper in my backyard and found a praying mantis egg sac attached to one of the shrub’s low-lying branches.

I wasn’t sure what the sac was at first since I’d never seen one before, but I did some research and figured it out after finding a nearly identical image online. The sac was a cream-colored, oval shape with a ridged, papery texture and is called an ootheca; each sac can contain anywhere from dozens to hundreds of mantises. I left the ootheca alone in anticipation of getting a chance to see some nymphs hatching once the weather warmed. Each day I went outside to check for progress, but none seemed evident.

In mid-April, I heard a ruckus and looked out the back window to see a magpie and a crow squawking noisily at one another. They were hopping around and circling each other aggressively near the junipers, and I suddenly realized they were arguing over who was going to get to eat that egg sac for breakfast.

They both flew off as soon as I opened the back door and headed out to assess the damage. A portion of the pointed end of the ootheca was pecked away, and I worried that the ragged indentations might have destroyed the contents inside.

How the birds ever saw that small casing tucked among the greenery, I’ll never know, but I did know if I left it there, they’d come right back and the sac would be gone. So I broke off the portion of branch that held the ootheca, placed it in a jar on the kitchen counter, and hoped for the best.

The sac remained unchanged for several weeks, but one evening about two weeks ago, some movement in the jar caught my attention.

To my surprise and delight, the nymphs had arrived! There were about 20 baby mantises resting on the greenery, and several more were working their way out of the confines of the egg sac. It seemed to take tremendous effort for them to extricate themselves; they’d paw furiously at the air and struggle to pull free, then pause to rest before starting in again. The ones that had already emerged stood perfectly still on the branch.

The nymphs were tiny, no more 1/4” long, and from the top they resembled a very small mosquito. Looking at them from the side revealed the telltale “praying” forelegs, and I marveled at their miniature perfection.

I remembered reading that the nymphs are voraciously hungry once they hatch, so I placed them among the flowers, bushes, and trees in the yard so they could forage for their first meal. I also remembered that only a minuscule percentage of nymphs make it to adulthood, so I wished them well as they ventured out into the world.

Of course, all of this happened prior to the cold snap and snowy weather we had over the past weekend. There’s no way to know whether any of those mantises survived the chill, but I’m hopeful that at least a few of them did. I’ve since learned that a mantis’ egg case can be refrigerated to delay hatching; I wish I’d known this bit of information earlier.

I recently found another ootheca tucked up into a corner of fencing near our house. This one seems more strategically placed than the first one I found and remains undisturbed so far. I’m keeping my fingers crossed for another hatching and for the yard to be populated with garden-friendly mantises this summer.