Douglas High grad on her way to academy 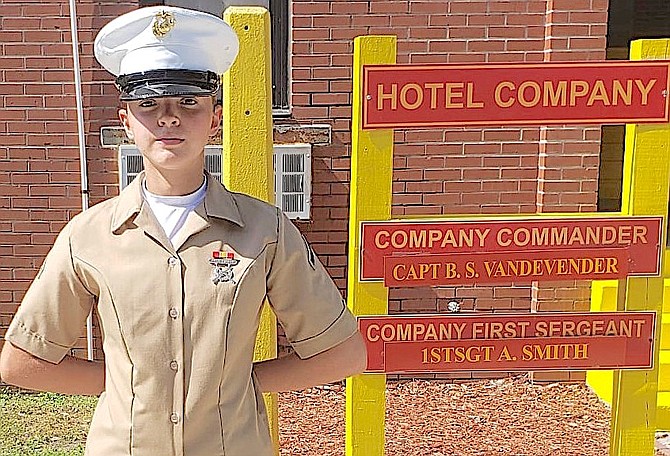 Ryan graduated from Douglas in December 2020 with a 4.0 grade point average and enlisted in the Marine Corps.

According to father Richard Ryan, she was the youngest Marine in her training regiment at 17 years and 4 months.

After completing advanced infantry training, she will enter the U.S. Merchant Marine Academy at Kings Point, N.Y. after transferring to the U.S. Naval Reserve. She earned a nomination to the academy in March while undergoing basic training.

As a child of a Marine, she grew up at various duty stations, including in Europe and Asia. The family moved to Douglas County in 2019, after Richard arrived at the Marine Corps Mountain Warfare Training Center in Bridgeport.

The family has since transferred to a new job overseas after only two years living at Pine View Estates in the Pine Nut Mountains.

Ryan attended Douglas High School for two years where she participated in swimming and JROTC. She also participated in basketball, track, tennis, rowing, martial arts, and SCUBA at Department of Defense international high schools. She was a delegate for Girls State in Nevada in 2020 and completed an international high school exchange to Japan in 2018. She enrolled in accelerated distance education during the pandemic.

While at Marine Corps recruit training, she earned the Expert Rifle Medal for shooting in the highest category possible, the National Defense Medal, earned the maximum possible score on the USMC Combat Fitness Test, and was promoted to Private First Class.

She was recruited to Kings Point for rowing, sailing, and cross country. She will be got to the academy in July and aspires to earn a commission as a Marine Corps lieutenant when she graduates from the Academy.