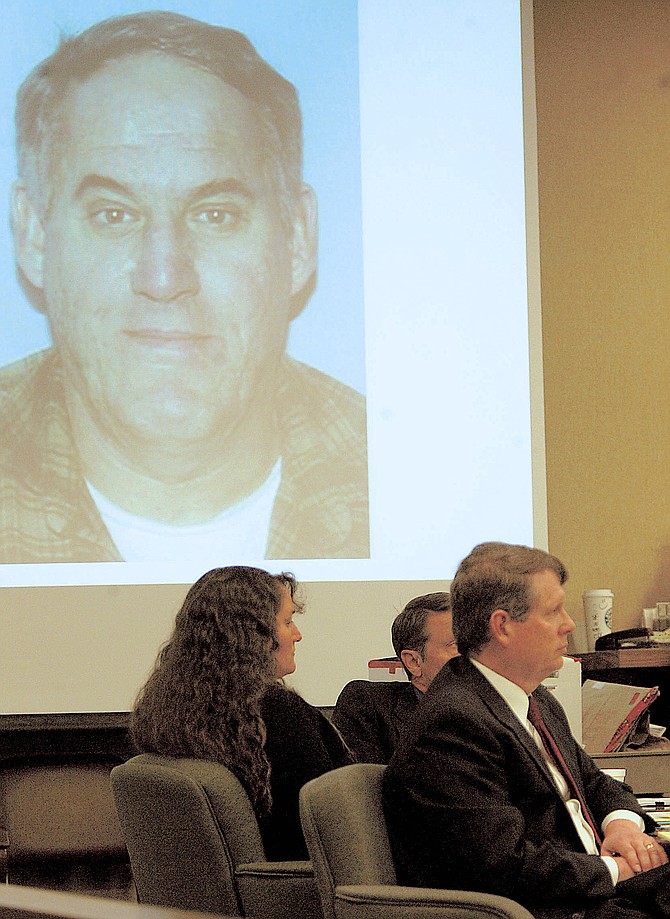 Karen Bodden sits with her attorneys as a photo of her murdered husband Robin appears on the screen above them in this 2008 file photo by R-C Photographer Shannon Litz.

Karen Bodden, 58, was convicted by a Minden jury on Jan. 22, 2008, nearly 17 months after her husband Robin Bodden was believed to have been killed.

Bodden never reported her husband missing and it wasn’t until Aug. 27, 2006, that his sister filed a missing person report.

She was arrested on Sept. 11, 2006, the day after Robin Bodden’s body was found buried in a shallow grave in the Pine Nut foothills above Johnson Lane. She hasn’t been out of custody since.

Found with the body were two strands of hair without the tags. Technology at the time couldn’t determine a DNA match, but her defense team asserts that next-generation DNA sequencing can discover whether the hair belonged to Bodden.

District Judge Tod Young ruled on May 6 that prosecutors have a right to witness the test.

At the time, the hair was tested for her trial the results were inconclusive.

The foreman of the jury told R-C Reporter Sheila Gardner that it was Bodden’s claim that her husband was kidnapped and killed by a drug dealer named Ramos that swayed the jury against her.

The entire proceeding was the subject of a Dateline NBC report.

Bodden was on probation at the time of the murder for a 2004 embezzlement from the Department of Motor Vehicles.

Bodden was also a suspect in what appeared to be an insurance scam when deputies responded to a 911 call on Sept. 9, 1994, and found her bound and gagged. She claimed two men came into the house she was supposed to be cleaning. Nearly $85,000 in damage was done to the property. It was the third time in two years she’d attempted the same thing.

She is currently serving a life sentence with the possibility of parole at the Florence McClure Women’s Correctional Center in North Las Vegas.

According to the Nevada Department of Corrections, her sentence isn’t scheduled to run out until 2065, though she may be eligible for parole before then.