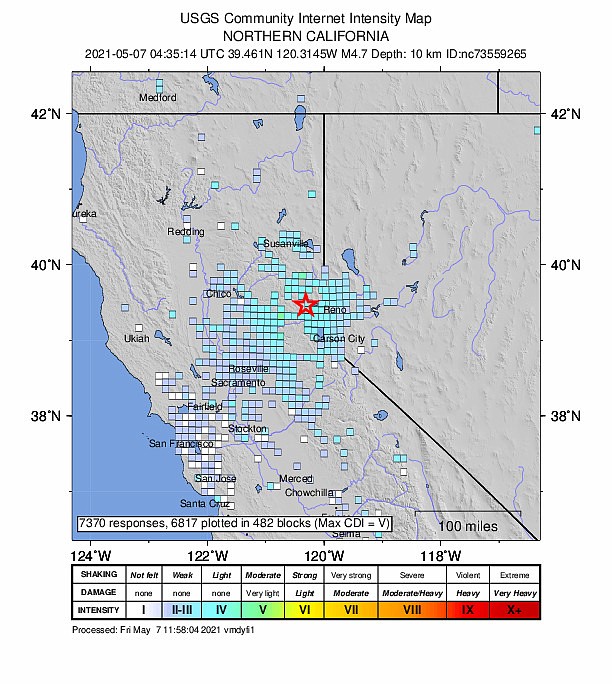 The extent where people reported the earthquake north of Truckee to the U.S. Geological Survey's Did You Feel It web site at https://earthquake.usgs.gov/earthquakes/eventpage/nc73559265/tellus

A magnitude 4.87 earthquake near Independence Lake north of Truckee was felt in Carson Valley on Thursday night.

According to the Nevada Seismological Laboratory at the University of Nevada, Reno, the shaker occurred 9:35 p.m.

Aftershocks from the earthquake continued for the next hour, according to the lab’s web site.

A score of Douglas County residents reported feeling the earthquake.

This is the second earthquake to occur in the Sierra in the last three weeks, with residents feeling a 3.93 magnitude earthquake that occurred in the middle of Lake Tahoe on April 25.

May 15 marks the anniversary of the 6.5 Monte Cristo earthquake centered southwest of Tonopah near Coaldale, the largest in Nevada in 65 years. The fault there is still active and has seen thousands of earthquakes over the intervening year, including a 2.2 magnitude earthquake on May 5.

Nevada is one of the top states in the nation when it comes to earthquakes.

Western Nevada is in the Walker Lane, which extends east of the Sierra from south of Death Valley to north of Pyramid Lake. According to researchers, the Walker Lane takes up 15-25 percent of the boundary motion between the Pacific and North American plates with the rest taken up by the San Andreas Fault.