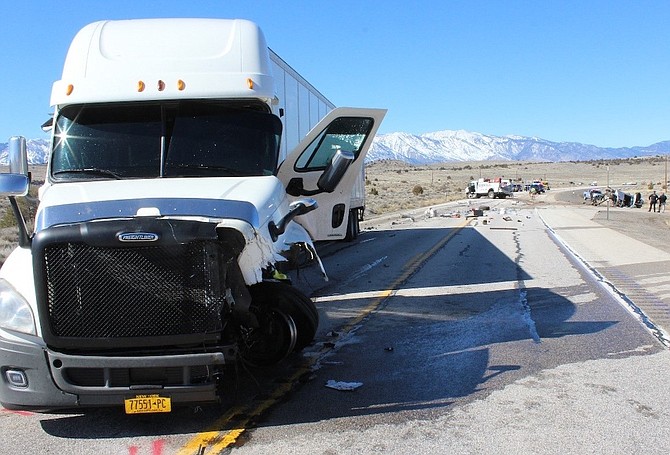 The Nevada Highway Patrol confirmed on Tuesday that Bodie Flat resident Sean Leonard was killed after being rear-ended by an 18-wheeler.

Leonard was stopped to make a left turn onto Courtland Lane in a Dodge Ram pickup at 9:53 a.m. Feb. 23.

The white Freightliner was southbound on the highway a failed to stop, hitting the rear of Leonard’s pickup, forcing it into the northbound lanes, where it was struck by a Peterbilt service truck.

A Sean Leonard Memorial Fund has been opened at Eldorado Savings Bank. There is also a GoFundMe account at https://gofund.me/1a62636a

Highway 395 was closed through the Pine Nuts for the better part of six hours.

It was the second time in under 18 hours that the highway was closed for a collision.

At 5:30 p.m. Feb. 22, two pickups were stopped at the red light at Riverview and Highway 395. When the light turned green they both entered the intersection and were struck by a Suburban traveling southbound on Highway 395 that didn’t stop for the red light. Minor injuries were reported as a result.