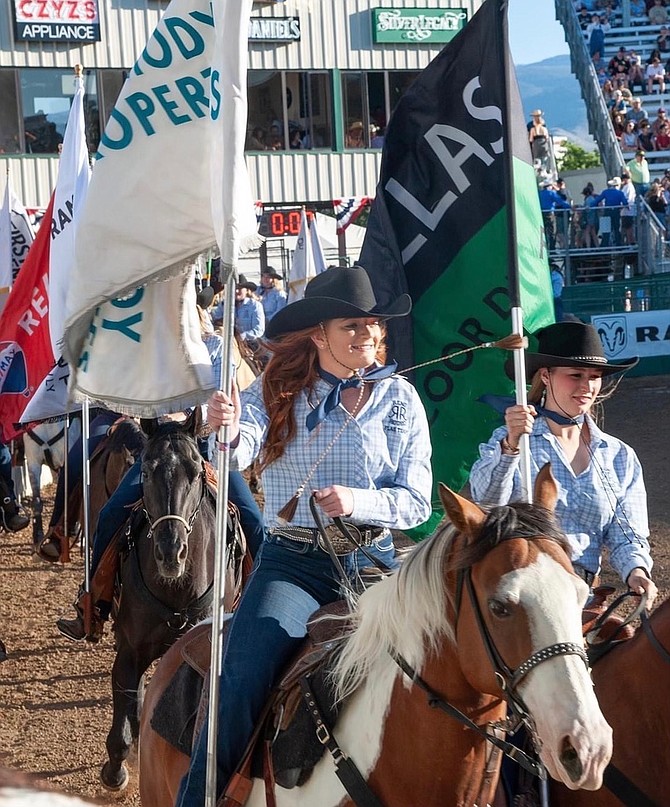 McKinna Jackson and her horse, Dally.

Through June 26, local cowgirl McKinna Jackson will carry the American flag during daily opening ceremonies at the 2021 Reno Rodeo. The first grand entry of “the wildest, richest rodeo in the West” takes place at 7 p.m. tonight at the Reno Livestock Events Center, 1350 North Wells Avenue.

Jackson has been a member of the Reno Rodeo Flag Team for the past five years and dreamed of one day earning the honor of carrying the American flag during the annual rodeo. She set her sights on trying out for flag carrier in earnest last fall after her beloved mentor and Great Aunt Pat Rahbeck passed away.

Prior to Rahbeck’s death, she’d given her 17-year old paint horse, Dally, to Jackson, and the gift inspired Jackson to pursue her long-held dream.

“You have to be on the Reno Rodeo Flag Team for five years to be able to try out [for American flag carrier],” Jackson said. “I have this really nice horse that my aunt gave me before she passed away. I’m about to retire him [from competitive events], and he’s the horse I wanted to do it on, so I just went for it…this was my first time trying out and I got it! It’s a big deal and I’m really excited.”

The family’s ties to the Reno Rodeo go back decades; Rahbeck was named Miss Reno Rodeo in 1955.

Jackson’s mother, Kim, said Rahbeck was a “big supporter of McKinna’s in getting to do this type of thing,” and that the honor of earning flag carrier feels, “a little bit like her looking down on McKinna."

“A big part of this is [Rahbeck],” agreed Jackson.

In preparation for tryouts, McKinna said she rode consistently all winter long to ensure she and Dally were in sync.

“There’s a lot of build up and a lot of work to get [to tryouts] because I wanted to be the best I could be, and it’s so important to me,” said Jackson. “It’s an honor to do it not only for my family but for the whole rodeo association.”

Since being selected as flag carrier in May, Jackson works daily on her routine and travels to Reno with Dally twice per week in order to practice with the flag team.

Kim said McKinna had only been riding a few years prior to setting the goal, at age nine, of earning a spot on the flag team.

“She’s always challenging herself and looking ahead to the next thing she wants to accomplish,” said Kim.

That determination and resolve have come in handy since the mother-daughter team took ownership of the Mad Dog Café and Market in Woodfords, CA this past January. Jackson artfully balances her equestrian pursuits with the responsibilities that come with operating a business.

Kim noted how McKinna’s adaptability and willingness to take on the role of business owner, coupled with her innovative ideas, have helped expand and improve the market.

Northern Nevada Dream Center provides a free grocery giveaway this Saturday, June 19. The organization’s mobile food truck is stocked with groceries, clothing, and other necessities and will be in the parking lot of Wink’s Silver Strike Lanes, 1281 Kimmerling Road in the Gardnerville Ranchos, starting at 11 a.m.

The event is first come-first served. For more information, log on to nndreamcenter.org or call 775-443-4090 and leave a message. As a volunteer-run organization, NNDC is staffed part-time, and voice messages will be returned promptly.

The Tahoe/Douglas Elks host Cook Your Own Steak night on Monday, June 21 from 5-7 p.m. Dinner includes a generous ribeye steak, baked potato, salad, baked beans, dessert, and fixings for a donation of $20; an extra split plate is available for an additional $5.

The Tahoe-Douglas Elks Lodge is located at 1227 Kimmerling Road in the Gardnerville Ranchos. Proceeds from Elks events benefit programs for seniors, veterans, and youth in the community.