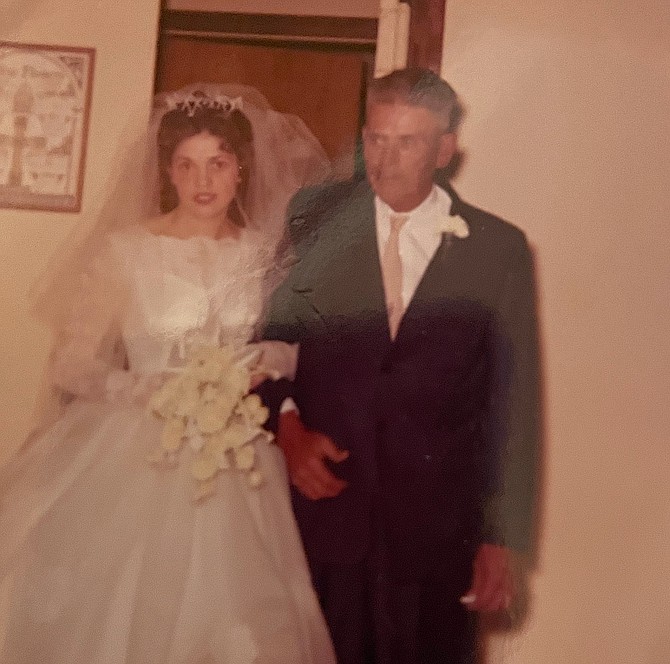 Betty Downs and Robert Wartgow in their wedding clothes. They were married Oct. 28, 1961.

Welcome to the final chapter of Betty Downs story of living in Johnson Lane as one of the original homesteaders. Chapters 1 and 2 were published on May 8 and 22 of The Record-Courier. Let’s continue down Betty’s Boulevard of experiences in Johnson Lane.

Dad was now working at the Minden Inn as a cook, Mom was cleaning rooms, and Kenneth was working for Bill Godecke and also was learning how to be a projectionist at the theater, we were able to rent a little apartment in Garnerville. They were right where that liquor store is now.

Walt, May, John and Denise moved to Gardnerville and lived in the house right next to the Gardnerville fire house.

After the summer of 1956 we moved out to our property. We lived in a tent and a little camp trailer. We were still a little short on income so one Saturday, Dad, Mom, Kenneth and I went to Smith Valley to pick potatoes. It was really hard work. You had to drag a hundred-pound sack between your legs fastened to your waist. Then you would bend over and throw the spuds into the sack as you tried to walk. We picked all day and the four of us only earned $14.

Dad would spend every day at the commissioners meeting trying to get electricity and paved roads. One Saturday, when Kenneth came in to work with Vic Pedrojetti at the theater to learn how to run the projector I came along. After the movie was over, I was going to wait in the car for Kenneth to get everything closed down. As I reached for the door handle a hand came from the backseat to unlock the door. I think I might have screamed because all of a sudden Vic was there pulling a man (a little intoxicated) from the back seat.

Loretta had moved in with us, as she had transferred from Bishop to Gardnerville. She worked for California Interstate Telephone Co. She was married for about a year and a half. Her husband left her when she was four months pregnant because he didn’t want children.

So now there was Mom, Dad, Kenneth, Loretta, baby Rodney and I living in a tent and a camp trailer.

We finally had electricity my freshman year at Douglas County High School. My Dad made a deal with Copeland Lumber and we started building our house with the help of Mr. Porter, the elderly gentleman who took us in when we were homeless. We were able to move into our house in six weeks from the time we started building. Loretta had a well dug and we had an inside bathroom with running water. Our house was two stories. Downstairs was a small living room, kitchen, back porch, one bedroom, and a bathroom. Upstairs, which you had to go outside to climb the stairs as two bedrooms and a half bath.

To get your final deed on your homestead you had to have a livable house, a well and 20 acres in cultivation. Eventually we were able to complete all the requirements.

Right after we moved in, Mom and Dad got word from Blythe, Calif., that my brother, Cletus, was in a pretty bad way. His wife had divorced him and taken their little son and moved away. I think Mom went to Blythe again on the Greyhound Bus and convinced Cletus to come back to Nevada with her.

Cletus, Kenneth and Dad started raising rabbits to sell. It all started as a project for Kenneth’s 4-H badge. Dad wore a rabbit skin turned inside out over his hand to try and keep it warm because his hand and arm had little circulation.

Loretta in the meantime had filed on the Homestead Act, only 80 acres because she was a single woman. She moved a little trailer to her property.

My sophomore year in high school we had a flash flood from the Pine Nuts behind us. It washed out the only road we had from our house to Johnson Lane. That road is now Stephanie Way, named after my nephew Stephan, who is now deceased. My brother, Cletus and I made a road we could travel on. I drove a tractor with a drag on the back. Cletus stood on the drag to hold it down so we could kind of smooth out the ruts. It took us two really full days from morning to night to just get a little bit travelable, so we could at least get to Johnson Lane. We worked on the road every day I was out of school for the next month. That is why I called it “Betty’s Boulevard.”

Loretta married John Lundergreen in April 1958, and relinquished her homestead, so Cletus filed on it, but I think he either sold it or also relinquished the 80 acres.

We finally had about a mile of Johnson Lane paved, but it would take another 3-5 years to get all the roads paved and named. I think it was probably the middle of the 1960s. It wasn’t until 1961 before we got phones. Dad and Harry Clapham named most of the streets in Johnson Lane. Harry’s daughter was named Vicki, so therefore Vicki Lane, a granddaughter, Judy, a great grandson, Dennis and Clapham Lane. Dad of course named Stephanie, Downs Drive, Chowbuck and Esaw, for my brother Gary, who used to say those words when he was young.

Betty went on to marry Robert Wartgow and raised two children in the valley until they moved to Idaho in 1987. I would be remiss if I didn’t express my gratitude to Amanda (Wartgow) Premo Betty’s granddaughter. Amanda and her brother Jake are the owners of DST coffee located in Gardnerville. Please be sure to stop in get some coffee and let them know how you liked the story of their grandmother Betty Downs Wartgow.

Amanda tells me the original house located in Johnson Lane was destroyed in a gas explosion after ownership passed to another owner. That is a story we are still discussing and doing some research about. We will follow up on that in a later Journal.

Again, thank you Amanda, I owe you. I hope everyone enjoyed this series of journals. If you have any questions you can reach me at johnsonlanejournal@outlook.com.