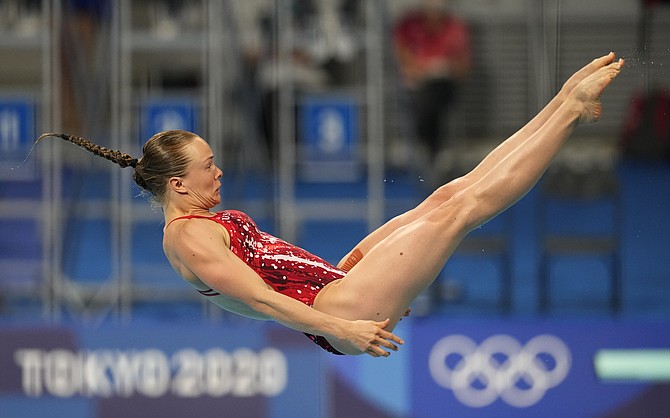 Krysta Palmer’s dives just kept getting better Friday night – or Saturday afternoon if you were in Tokyo.
After a score of 54 on her second dive, Palmer followed with three scores that built her way back up the leaderboard.
The women’s 3-meter semifinal had 18 divers from Thursday’s preliminary qualification and took the top 12 divers from the semifinal into the final round.
Palmer ended the semifinals with a fifth place finish, not only qualifying, but capping the session with her best individual dive.
Attempting the double out – forward 2 ½ somersaults with two twists – in the fifth round, Palmer earned three 7.0’s from the judges to go alongside a 3.4 degree of difficulty.
The Northern Nevada native is one of only three divers in the competition performing a dive with a degree of difficulty of 3.4 or higher, per USA Diving.
Saturday evening, Nevadans can watch their Olympian compete for the gold, starting at 11 p.m.
The finals can be streamed on NBCOlympics.com or watched live on USA Network.

Dive-by-dive
Palmer was caught on camera showing just slightly more emotion than usual in the moments following the double out.
After a 60 on her opening dive left Palmer in 14th, the 54 on her second dive pushed the Douglas High grad to the closest she would be to elimination.
In round 3, Palmer scored 61.50 points on a reverse 2 ½ somersault to jump to 11th.
By the end of the fourth round, Palmer was in eighth place overall.
When she popped out of the water, the 29-year-old posed with two thumbs up and a large grin, likely knowing she had done enough to extend her Olympic stay as long as possible.