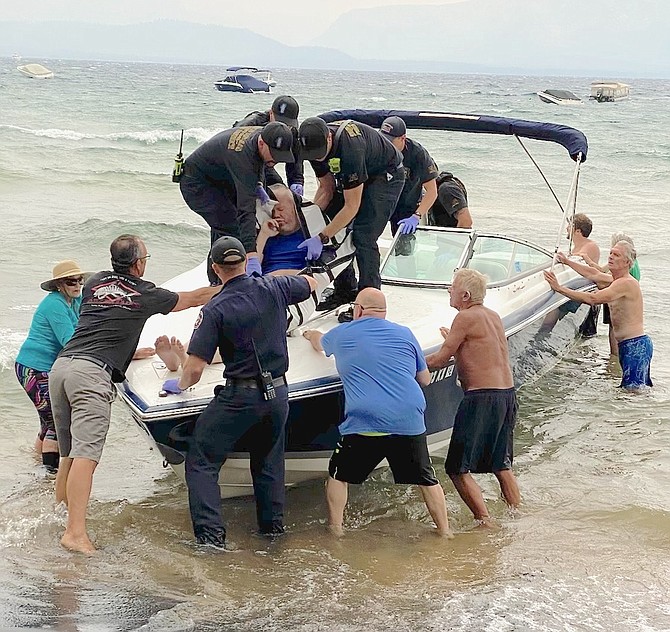 Good Samaritans help a man who suffered from hypothermia after jumping into Lake Tahoe during a storm from a boat that was adrift. Tahoe Douglas Fire Protection District Photo

A charter pontoon boat that ran out of gas with a child over the side was hit a squall on Monday afternoon nearly turning a day on Lake Tahoe into a tragedy.

A report came in around 3:30 p.m. that the boat with more than a dozen people aboard was adrift and there were three people in the water.

Tahoe-Douglas Fire Marshal Eric Guevin said a 9-year-old had slid into the water from the double-decker boat when the swells started to cause the boat to drift away from him.

While the boy was wearing a life jacket, neither of the two adults who jumped in to rescue him were wearing theirs.

Fortunately, a passing boat stopped and rescued them from the water.

Tahoe Douglas Fire’s Marine 24 responded to the incident off of the Lake’s east shore.

Guevin said that by the time the boat got to the man, he was too weak to put on the life jacket they threw him and he was slipping into the water as they fished him out.

One of the Samaritans who rescued the man said the waves went from small whitecaps to 3-4 feet almost instantly as a result of the outflow winds from a powerful thunderstorm that passed over Carson Valley.

The man was transported for treatment for hypothermia, but he will survive.