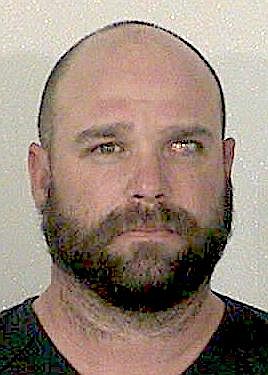 Nearly four years after a beating that prosecutors contend resulted in the death of a Gardnerville Ranchos man, the accused perpetrator was sentenced to 4-10 years.

Adam A. Bernard, 43, avoided a trial by entering a guilty plea to voluntary manslaughter in connection with the July 8, 2017, beating of Brian Cook.

Bernard’s plea was worked out in a settlement conference between prosecutors and defense attorneys. While Bernard isn’t admitting he beat Cook, 41, into a coma, the agreement does acknowledge there is sufficient evidence he could face a more serious consequence at trial.

Bernard was taken into custody on Thursday evening as a result of the sentence.

Cook died July 30, 2017, after failing to regain consciousness after the beating.

Prosecutors would have shown a video at trial that Cook went down in the street and Bernard continuing to punch and kick him.

Both Cook, Bernard and a third man had been drinking. Deputies responded to Manhattan in the Ranchos to a report that two men were carrying a third one out of the street.

Under the agreement, the 10-year sentence was the maximum Bernard could receive.

The settlement agreement resulted in the cancellation of a trial that had been scheduled to take place through most of last month.

Bernard was represented by Maria Pence and Brian Filter. The Supreme Court recently permitted settlement conferences in criminal cases. Bernard’s trial was originally scheduled for March 2020 but was postponed by the coronavirus outbreak.

Hope he ends up serving the higher end of the sentence!