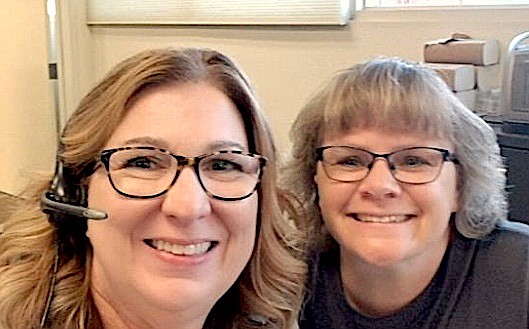 For Douglas County 911 Emergency Services, its mission statement “first to respond, first on scene” are words to live by. For 911 dispatcher Melissa Johnson, it’s not just a statement, it’s a mission.

Johnson’s best friend, and 20-year 911 dispatch veteran Kristin Oilar, has pancreatic cancer and needs aggressive treatment. In typical fashion, Johnson was first on the scene, setting up a GoFundMe account to help Oilar and her family with the overwhelming task ahead – get treatment, beat cancer.

Oilar received her diagnosis on Feb. 9. Since then, she has learned she will require two to three months of chemotherapy to shrink the tumor, which lies near a main artery, after which, she’ll undergo a surgery to remove the tumor. Staring down months of brutal treatment and recovery, Oilar is facing her diagnosis with her trademark practicality and positive attitude.

“I told my husband when we first started the process of finding out what this was, we’re going to deal with whatever cards are dealt to us,” she said. “If it’s my demise, so be it, but I’m going to do everything in my power to fight it.”

Fighting for her future is nothing new to Oilar. Following a divorce, she joined the National Guard and shipped off to basic training in 2000. She served six years as a truck driver and spent several years as a guard spouse when her new husband, a 14-year veteran of the National Guard, was deployed to Afghanistan.

“Having a positive attitude is huge,” she said. “And I do, 100%. It’s not in my hands, I’m only here to do whatever I’m supposed to do. Positive attitudes roll downhill, and other people tend to be positive if you are.”

For Johnson, starting the GoFundMe account was like paying it forward. Oilar had started a GoFundMe for another dispatcher who had lost her home in a fire last year.

“She’s a good person with a big heart and would do it for any one of us if the roles were reversed,” Johnson said. “She’s a mom, a grandma, a veteran, and for the past 20 years has served the community as a 911 dispatcher. Anything we can do as a community to help her with the medical costs not covered by insurance and for all the time off she and her husband will have to take is appreciated - $5, $10, heck, even just a prayer.”

Johnson said Oilar is dedicated to her job and loves the “guys and gals” she dispatches for. The feeling, it seems, is mutual.

“Kristin and all of the 911 dispatchers are there every day, every week, every year supporting our community,” he said. “It’s not often one of our own needs the community’s support in return. We urge everyone in Douglas County to send your prayers and your contributions to Kristin and her family in their time of crisis.”

Aside from actively promoting Oilar’s GoFundMe, May said EFPF will be hosting additional fundraisers in the spring for Oilar as she progresses through her course of treatment.

For more information or to contribute, visit www.gofundme.com/f/help-my-best-friend-kristin-who-has-cancer.