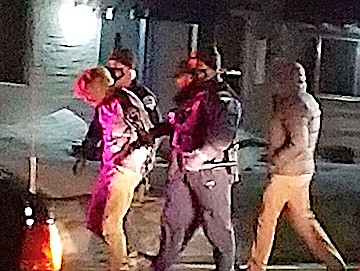 A California man was arrested after an hours long standoff in South Lake Tahoe.

Special Weapons and Tactics team members from Douglas County participated in a South Lake Tahoe standoff on Wednesday evening resulting in the arrest of a wanted felon.
The county's MRAP armored personnel vehicle was called to the scene of the standoff at around 4 p.m.

The Tahoe SWAT team, along with the Douglas County Tactical Team, Tahoe Douglas Bomb Squad and CHP all responded to the scene.

Nevin was out on bail on 50 felony charges. He also had numerous warrants for his arrest for charges including domestic violence, felony threats, intimidating witnesses and had been known to threaten to kill law enforcement.

South Lake Tahoe Police learned that Nevin owned a residence in Tahoe and went to arrest him. When Nevin refused to make any contact with officers his home was surrounded and the neighborhood was evacuated for residents’ safety.

After multiple other attempts to contact Nevin, power was shut off to the neighborhood for a short period of time.

A spotlight was directed at Nevin’s home and authorities could be heard over a loudspeaker telling the suspect to surrender.

Eventually, police established contact with Nevin and he came outside. After a brief struggle he was taken into custody with minor injuries.

No officers were injured.