Bail increased to $200,000 for man arrested in Minden stabbing 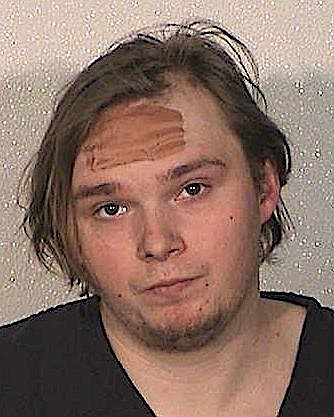 Thomas James Meagher after a collision in the Gardnerville Ranchos on Dec. 31, 2020.

Bail for a man who stabbed a deputy during an altercation last week was raised to $200,000 cash on Monday.

Thomas James Meagher, 24, of Gardnerville was taken into custody after a traffic stop at Highway 395 and Ironwood Drive

Meagher came out of the passenger’s seat of the vehicle wielding a knife that he allegedly tried to use on himself, a sheriff’s K-9 and ended up cutting a deputy.

“By words and deeds, the defendant has show he is a virtual certainty not to show up for court,” Prosecutor Erik Levin said. “More importantly he represents an imminent threat to his own safety, as well as to other people.”

East Fork Justice of the Peace Cassandra Jones agreed that Meagher posed a high risk to the community and likely wouldn’t return to court.

Meagher was on probation for fighting with deputies on Oct. 25, 2019. He was found hanging from the rafters at his home and he struck deputies when they cut him down. At the time, he was on a deferred sentence in connection with an Aug. 28, 2018, assault on his mother.

Levin said that Meagher made two calls to county offices threatening “suicide by cop,” which resulted in mobilization and extra patrols.

On Friday, Levin said Meagher tried to stab himself in the neck, but was prevented.

Deputies deployed a taser and shotgun beanbag rounds to try and stop Meagher, but he continued walking toward Ironwood Park.

A patrol K9 was unleashed, but Meagher tried to stab the dog before being hit by a taser which finally immobilized him long enough for deputies to grab him.

During a struggle, Meagher stabbed a deputy in the arm before being fully restrained.

The deputy was transported to the hospital with a nonlife-threatening wound and treated and released.

Meagher was evaluated at Carson Valley Medical Center and then booked into jail on the warrant and for charges of battery with a deadly weapon, battery by a probationers, resisiting arrest while armed and trying to kill a police K-9.

A warrant was issued for Meagher after he refused to come to court to deal with a case. Attorney William Cole said he was afraid Meagher would harm himself if deputies came after him.

According to the sheriff’s office, Meagher called 911 and told dispatchers he wanted deputies to kill him. He’s also contacted the District Attorney’s Office and said something similar.

On New Year’s Eve 2021, Meagher ran his pickup into the side of a home on Pleasantview.

He was also involved in a July 22, 2020, hit and run in which he drove away from a collision on Waterloo near Highway 88.