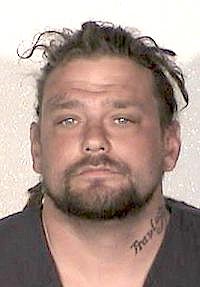 A Texas man is scheduled to appear in East Fork Justice Court on Wednesday after he was arrested last week for allegedly assaulting his girlfriend with an axe.

Christopher Lee Hogan, 32, was taken into custody without incident in the parking lot of Clear Creek Plaza after the woman sought help from a business.

She told deputies that they’d been drinking in the pickup and that Hogan fell asleep. She slapped his knee to wake him up, and he responded by hitting her on the back of the head so hard she hit the steering wheel.

When she protested, she said Hogan took an axe from a sheath he had on his leg and held it to her cheek, cutting her. Deputies confirmed she had cuts on her cheek that seemed to match the axe blade.

Hogan had a .206 preliminary blood alcohol content when he was arrested. She had a .164 at the time. Hogan’s bail was set at $23,000 bondable and attorney Maria Pence appointed to represent him.