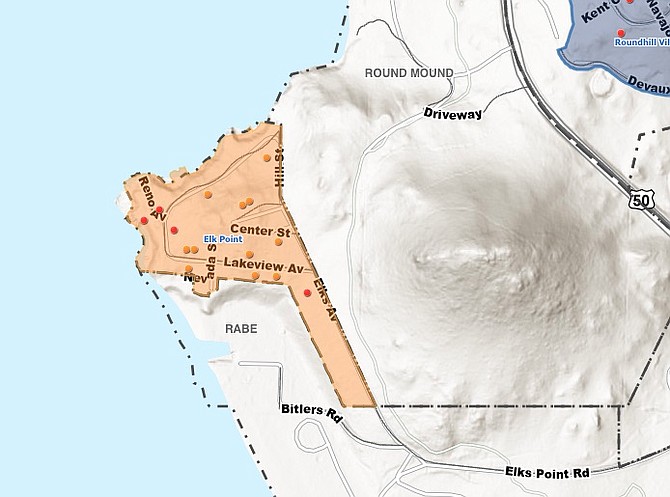 Douglas County's web sites shows where vacation rental permits are in the vicinity of Elk Point at Lake Tahoe.

A fight over allowing vacation home rentals in an exclusive Lake Tahoe community has reached the Nevada Supreme Court.

The Elk Point Country Homeowners Association is appealing an injunction issued by District Judge Tod Young that prohibits residents from renting their property. A mediation session has been set for April 27.

Two families obtained an injunction in December against the Elk Point Country Club Homeowners Association of new rules that would allow either short- or long-term rentals in the community.

Elk Point is located between Nevada and Round Hill Pines Beach on the east shore of Lake Tahoe.

According to the injunction signed by Young in December, the association’s board of directors adopted rules that would permit transient and long-term rentals in September 2019.

“The evidence demonstrates … that the Elks Point Country Club is not to engage in behavior which encourages profit to its members and that it was organized with the specific intent to provide its members with fellowship and recreation,” according to court documents.

According to neighbors, club members are renting their units, and have even been encouraged to do so by the association.

Young found that the rules allowing property owners to rent their homes were in violation of the community’s bylaws and aren’t enforceable.

“The court finds that members engaged in renting their units for profit constitutes an immediate threat of permanent damage to the Elks Point Country Club and its members through the loss of its tax-exempt status and the loss of the character of the community.”

In his order, Young told the association to enforce its bylaws that prohibit members from raising any revenue or profit through its properties or facilities.

He gave the association until mid-March to prohibit, prevent or enjoin any rental use of the member’s units for both transient and long-term rental.

“Douglas County was not a party to this action, and Judge Young’s order does not apply to Douglas County’s VHR ordinance,” he said.

It has long been Douglas County policy not to intervene in disputes involving homeowners associations or enforcing covenants, codes and restrictions.

Those are private civil agreements between homeowners and the association operating their neighborhood.

One of the initial proposals in Douglas County’s vacation home rental ordinance was to have districts and associations sign off on permits.

According to the county’s mapping, there are four vacation rentals permitting occupancy of 10 or more and about a dozen rentals allowing an occupancy of 5-10 in the vicinity of the neighborhood as of Monday.

Thank you Judge Young. I hope your ruling is upheld by the State Supreme Court.