Ski resorts wrap up a second season under coronavirus 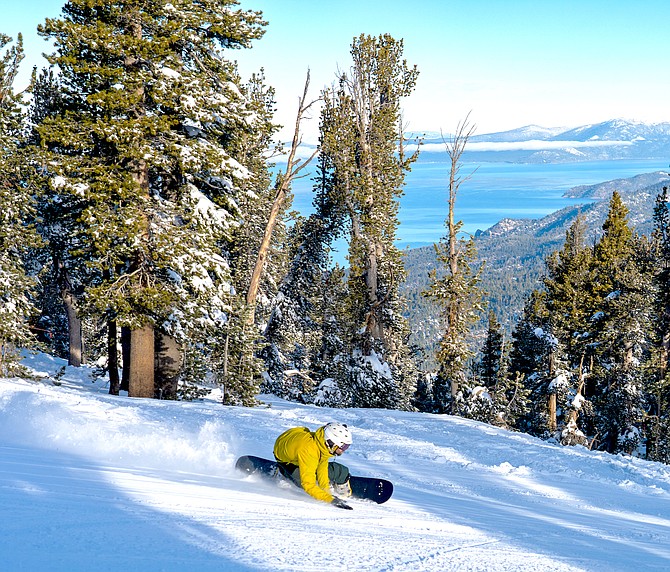 A snowboarder shreds at Heavenly Ski Resort during the season that's wrapping up on Sunday. Heavenly Mountain Resort

The impacts of the coronavirus have had innumerable effects on businesses and Lake Tahoe’s ski industry wasn't spared.

Heavenly Ski Resort closes for the season on Sunday, along with Northstar, Diamond Peak, Heavenly, Boreal and Soda Springs. Squaw Valley Alpine Meadows’ closing day will be May 31.

Resorts adapted to the changing environment and put in place several protocols to keep lifts turning.

Unlike other industries, resorts were allowed to operate in all tiers of the state's Blueprint for a Safer Economy, albeit with several restrictions.

Virus restrictions and capacity limits significantly reduced visitation for many of the resorts, but despite all the hurdles, the resorts had a successful season.

“COVID has had little impact on the part that matters most this season: actually skiing and riding downhill. That fact alone provided an element of normalcy and freedom that I think we all needed more than ever,” said public relations director for Squaw Valley Alpine Meadows Liesl Hepburn in an email. “There were big differences in the lift lines and all the nonski experiences, but keeping the most essential component relatively unchanged felt really good.”

While the snowpack is well below average this year, resorts reported the season had several ideal powder days. Hepburn says there are currently great spring skiing opportunities at Squaw Alpine and they are celebrating retro-month at the resort.

“I think this winter we all needed that mountain escape more than ever, and personally it gave me even a greater sense of appreciation for being able to recreate in the Sierra in our expansive outdoor environments,” said Joanna Mcwilliams, communications manager for Vail Resorts Heavenly, Northstar and Kirkwood, in an email. “It’s been incredible to see our community of skiers and riders come together to make this winter a success by following our safety protocols.”

Diamond Peak also had several COVID restrictions in place. Raymore said that he noticed more people on the mountain mid-week due to the influx of new residents and more flexibility as several jobs and school went remote.

He said conditions were good, but they didn't have as many powder days as they hoped for. However, they opened a week earlier and stayed open a week later due to the quality from their snow machines.

Keith Lederman, communications manager for Sierra-at-Tahoe said that overall their snowfall was below average, at about 60 percent, but conditions were good throughout the season.

Lederman said the coverage was good and they too had great powder days. The terrain park was also open throughout the season. While the resort had its last day on April 11, Lederman said they wanted to finish the season on a high note while the snow conditions were still good.

Sierra, like nearly every other resort, saw a decline in the number of visitors due to the pandemic.

“It was overall below average, but we were pleased to see the demand grow after the holiday season,” he said.

At the beginning of the season, he said people were still hesitant, but after showcasing their precautions, businesses ramped up and in January through March with strong demand.

Due to limited capacity requirements mandated by the state, resorts adapted by limiting the amount of parking, capacity and introducing protocols on the lifts and on the slopes, including closing lodges.

A few resorts also implemented a reservation system for both day and season pass holders.

Squaw Alpine removed the sale of walk-up tickets and limited the supply of advance purchase tickets which accounted for around 70 percent fewer day tickets than prior years.

Capacity was also limited on the chairlifts, aerial tram and funitel.

“With lower usage and availability of public transportation and carpooling, our guests arrived with fewer people per vehicle and lots filled more quickly,” Hepburn said. “Limited capacity and physical distancing in lift lines made them appear longer and, at times, take longer to get through. We asked our guests to bring their patience and flexibility, and they have done just that.”

To operate, resorts were mandated to require masks which added another component to the unique season.

Hepburn says that while Squaw Alpine was concerned about compliance regarding masks and distancing in the beginning, they set up strong enforcement and visitors were happy to comply with the policies.

“We are about having fun, and that part isn’t much fun. But our guests have been overwhelmingly cooperative, and appreciative of seeing us take action,” Hepburn said. “Both our guests and our employees deserve a ton of recognition for staying positive and making it possible to stay open.”

After a day on the slopes, traditional lodge and aprés were paused, but people adapted.

“Everyone went back to the basics,” said Lederman. “People really embraced ‘make your car your lodge.’”

He said that since Sierra’s lodge was closed, other than offering take-out options, they were afraid to lose the “community aspect” of the resort. However, people adapted and visitors' vehicles became their own personal lodges and the parking lot became the aprés hangout complete with barbecues.

“Everyone seemed genuinely happy,” he said.

While resorts have been impacted the last two years by the pandemic, they have a positive outlook on next winter and hope to return to a sense of normalcy.

The resorts who used a reservation system this year, don't plan on using it next season.

Lederman says they are optimistic and confident that they will be able to offer the lodge next season as well.

Season pass prices also are set to be slashed next season at Northstar, Kirkwood and Heavenly. Vail Resorts announced a 20 percent reduction in passes for its 34 North American resorts.

“We’ve learned a lot so far this season, but the most important takeaway has been the flexibility and resiliency of our guests and staff,” Hepburn said. “We all worked together to play by the rules and keep skiing and riding open.”