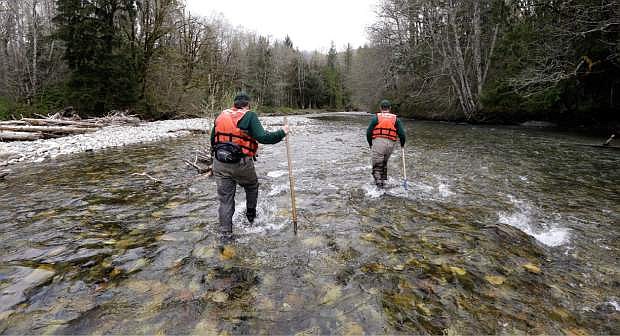 In this photo taken Tuesday, April 15, 2014, fisheries biologists Jenni Whitney, left, and Pete Verhey wade into Squire Creek, a tributary of the North Fork of the Stillaguamish River, as they search for salmon spawning nests near Darrington, Wash. Finding the nest, called a redd, is an encouraging sign that steelhead trout may be making their way upstream from Oso., Wash., above where a massive landslide decimated a riverside neighborhood a month ago and pushed several football fields worth of sediment down the hillside and across the river. As search crews continue to look for people missing in the slide, scientists also are closely monitoring how the slide is affecting federally endangered fish runs, including Chinook salmon and steelhead. (AP Photo/Elaine Thompson)