Working out the kinks in new hospital 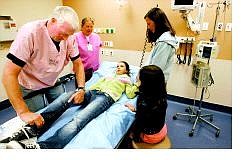 Cathleen Allison/Nevada Appeal Dr. Richard Newbold, an emergency room physician, and registered nurse Barbara Lehn check out Katharyn Woods, 10, as her mom. Mary. and sister Emily look on Wednesday during an operations simulation at the new Carson Tahoe Regional Medical Center. Woods was pretending to have a head injury from a fall off a horse as part of the drill.