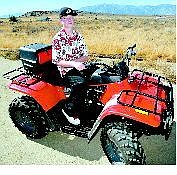 Shannon Litz/Appeal News Service Fourteen-year-old Tim Bowers Jr. helped save his friend when the other boy was thrown from a dirt bike.