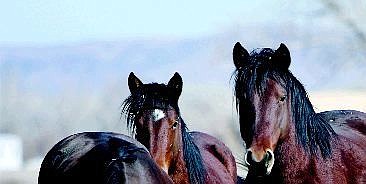 Chad Lundquist/Nevada Appeal The sale of Bureau of Land Management lands in Lyon County could one day fund a wild horse adoption and training center, parks, school and other public projects. The bill now before Congress is being opposed by the county due to requirements that wilderness areas be included. A compromise is expected. Wild horses graze in a field near Santa Maria Ranch in Dayton on Wednesday.