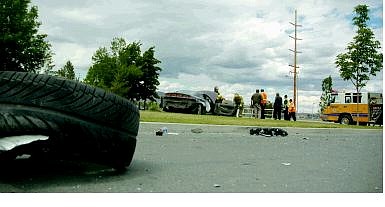 Kevin Clifford/Nevada Appeal Carson City firefighters and sheriff&#039;s deputies respond to a hit-and-run scene Friday in Mills Park across from Carson High School. Police say three teens involved in the accident will likely be charged and that alcohol was present at the scene.